The fourth event of the Czech Downtown Series was held on Saturday, September 8, in a pictoresque town of Dačice. This spectacular event in Lord Alexander Sidor’s territory had been in the grapevine for a while. Did Alex and his crew meet the high expectations? Please sit down, relax and listen, dear digital pilgrim. 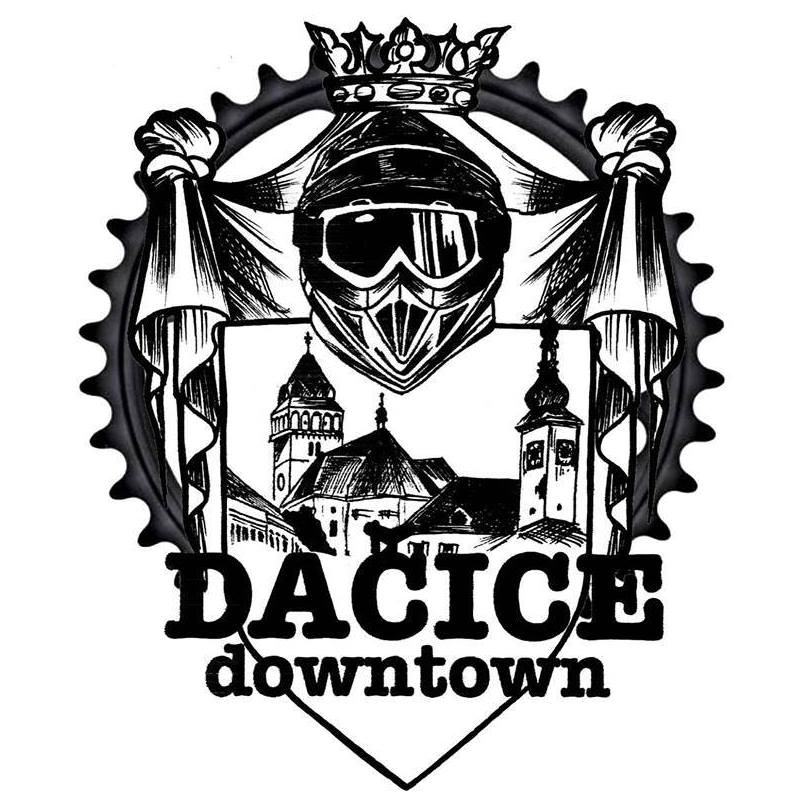 Arriving with my family as early as on Friday evening, we headed straight to the trackwalk. As the track is the shortest in the series, there is no need to bring any refreshments. The starting line is the same as last year. Say a prayer and go, out of the church tower door. To the left and speed up to reach the mini double, undoubtedly inspired by downmalls. A fifty-fifty chance to miss the not even half-a-metre area of the track, or sail through safely. To the left again, round the church, and choose the right prayers. Now pray to hit the drop and not to hit a tree. If you ride in the right way, it is just a piece of cake. Before you have time to realize that, you are speeding up,coming toan S-shaped stretch, and then… heading straight into a car. 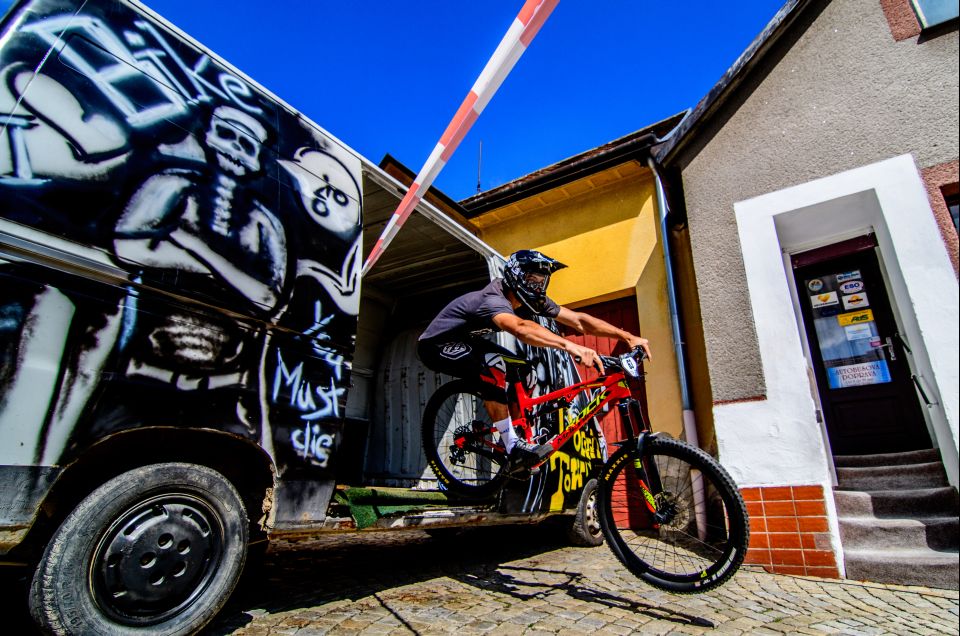 Well, we have seen a few rides over cars, that is what Rakovník has taught us over the years. But a van across a way, with two doors newly cut out with an angle grinder? This can be only seen in Dačice. Remember that quote, as this is not the last time I use it in this report. Yet let us keep on the track. From the car you turn right, bunny-hopping onto a gravel path, a slight diversion and then just to a wooden inclined plane. Even if it is covered with wire mesh, this has to do with a big portion of preciseness, with all the dust and dirt covering the surface with more and more riders going through this stage. Two, three steps, and here comes another titbit. Once more inspired by downmalls. On the glossy marble floor of the gloomy hall of Dačice City Office it takes even more skill than on the inclined plane not to slip and avoid a painful and shameful fall. 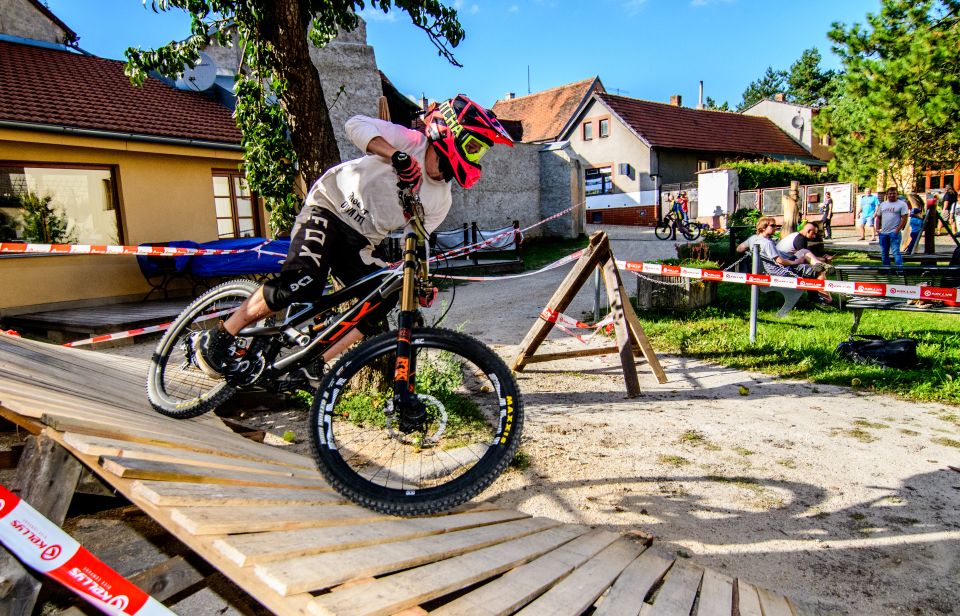 Steps, then some more steps, down the staircase and out of the building, towards a flock of drops. The smaller is introduced by a slow-down S-shaped stretch, getting you ready for what is coming next. The bigger one is faster, but definitely not a sitting duck. The Sophie’s choice up to every single rider. Whatever it takes, before reaching the fountain to jump over, there is a small, hardly visible jump to deal with. After the first few rides, 8 out of 10 riders would definitely use their top-frequency dirty word to refer to that wonderful stretch of the track, as it caused big troubles. Then a tire-wash, right one, left into the tiny tunnel, a short sprint and then a jump across the river. This can only be seen in Dačice. See? I used these very words to please the head of this event, whom I found wading through the Dyje river with a gang of local enthusiasts. To prepare this track must have taken a lot of hard work. 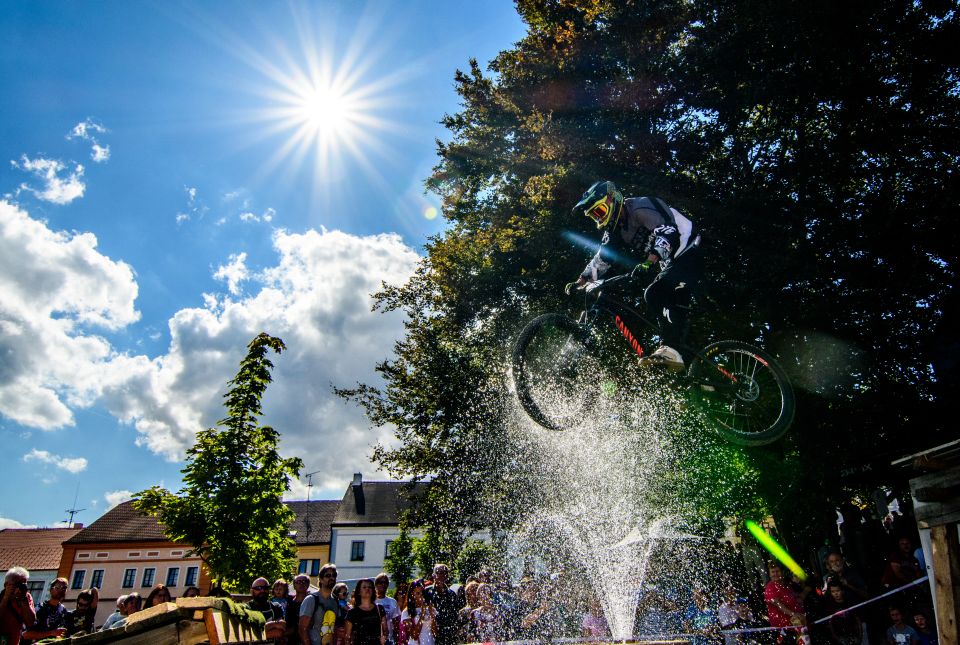 Saturday. The race day. The town, sleepy on other days, wakes up into a marvelous morning. The sun is shining, the car park is getting full, flags are flying, inflatable items are getting shape out of nothing, the riders are checking in at cycling shop Kunkal. Everything going smooth. There are 105 riders. This is going to be a badass day. There are 20 junior riders in their category and over 80 men. Without Simona Jirková, who is now taking part in the world cup in Lenzerheie, there is an only woman in the race – Denisa Martinková.

A new scene. The training is on. The small stretch mentioned above causes troubles, one rider even breaks his arm, there are many contusions in the area of the most sensitive male parts. The audience enjoy both bike jumps and heel jumps. Demo summons the board, cosidering closing of the big drop. Čerw and I tell him that there is the option to take the small drop instead, everybody can make their choice. This is not soccer, right? So everybody calms down after a little while and now there begins the opening ceremony, started by drumming group Hakuna pesa, which they say means „no problem“ in Swahili but it actually means „no money“. Yet the first-meant translation corresponds better with this event. 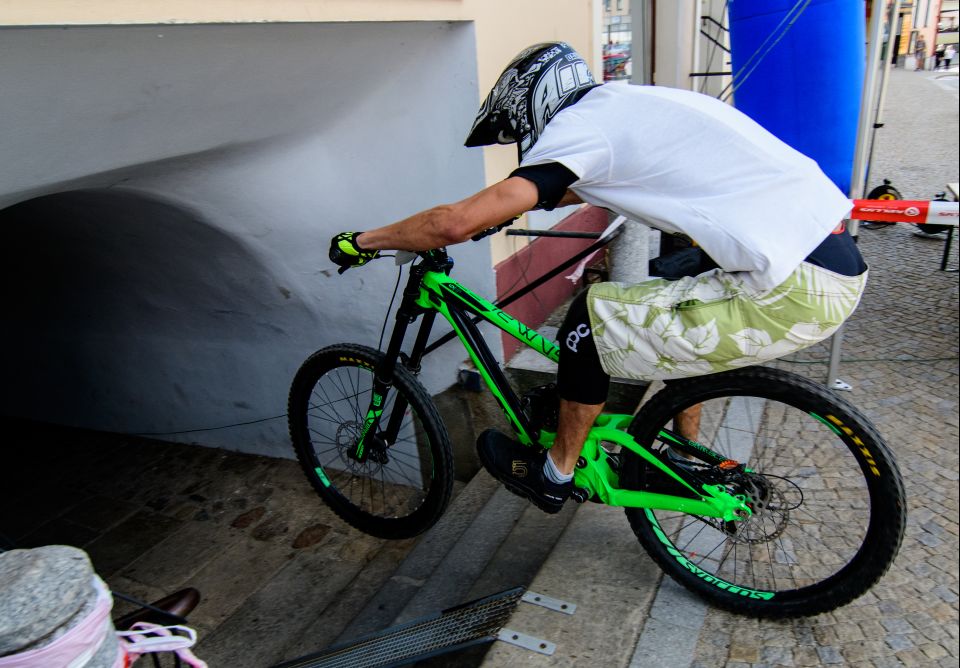 Round one. Denisa opens the race and you can see the audience simply love downtown. People watch the live race and also check statistics on the LED screen. The area at the fountain is vibrating, encouraged by commentator Martin Šťastný, who asked everybody by email to send him personal info. There were also some quite juicy stories shared with the audience.

The junior riders surprised everybody to be as good as the best men. And, whenever a badass from Dačice was riding down the track, the noise must have beaten even the chainsaw roar as far as in Lenzerheide. The organizers had to ask people not to move the finish tape. Some special safety features often used in big concerts would have been just fine, I think. 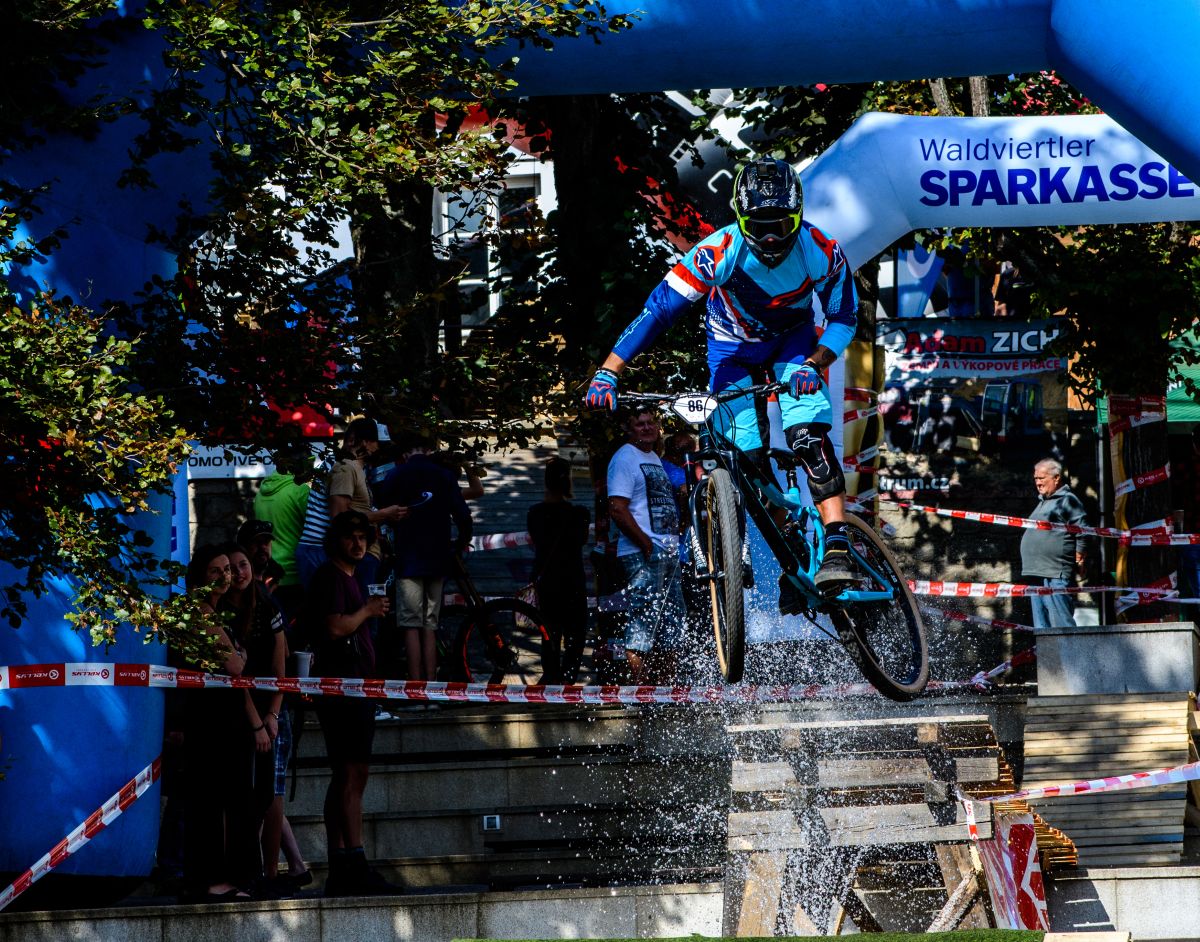 I will not give all the results here, as you can find the results of the two qualification rounds below the article. But I want to stress that the reason we organize and participate in downtown races is not only to prepare the best conditions for the riders, but also for the visitors. The vibes of the place with a lot over one thousand people were just fantastic. 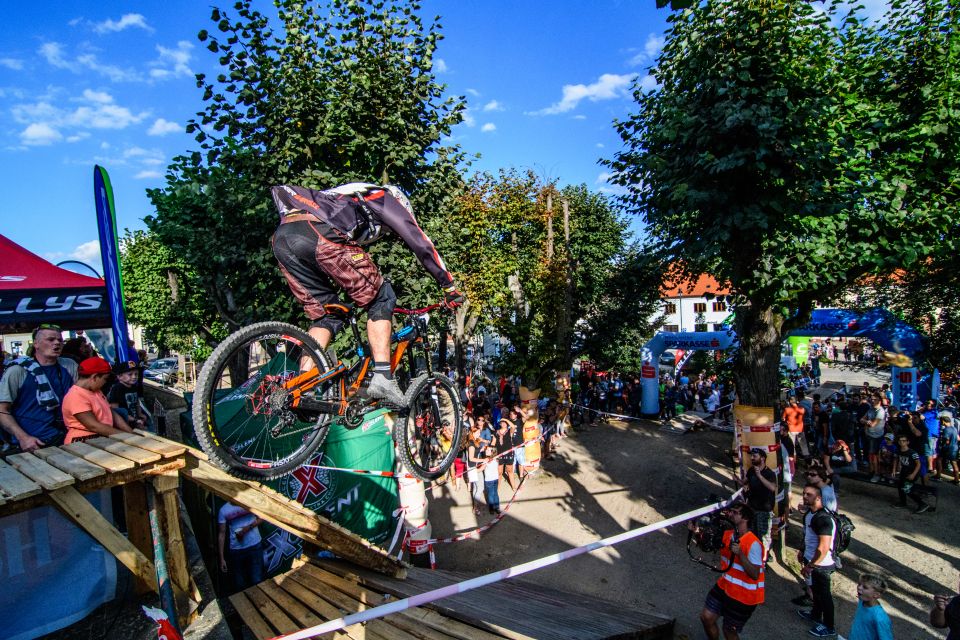 And when you see Dema, with number 101 on his jersey? This is the moment you fully understand the expression „Life is porn“. Now let us the show begin, baby. Encouraged by his eagerness, supported by the people, weakened by the lack of sleep in the previous few days make him fall shortly after the starting line, then again in the City Office, after that there is some trouble with the chain, but all these aspects make him make it to the finish tape anyway. And I managed to be better than Alex. Here you have some challenge for the second round, boy. And not only Alex, but also the ambassador of the Czech Downtown Series Marek Petelík, who, after fatal mistakes, is not even in Top 25. With no space for tactics, the second round is expected to be just as tough. 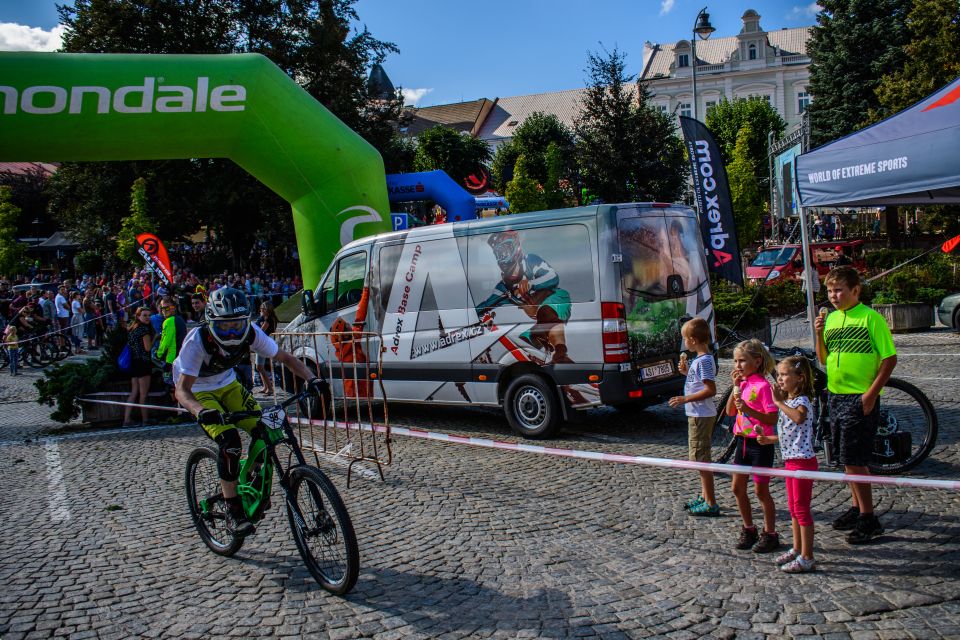 So top 5 juniors and top 25 men qualified for the finals, but during the second round, there were some rumours there would be no final round due to lack of time. But even though there was a packed programme coming, including a BMX / skateboard / kickbike / inline skate mini-ramp exhibition, I encouraged Dema to take a deep breath and do the Dačice final round anyway, with our help. 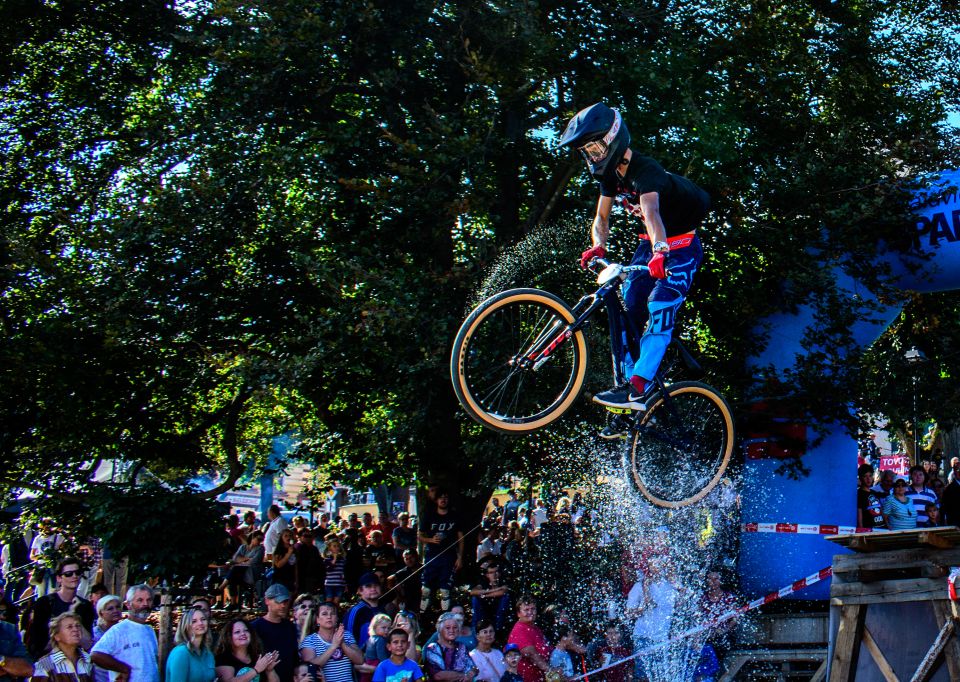 The atmosphere was beyond description. In both categories, the slowest riders started, with increasing suspense as the best riders were coming. Every new ride brough shorter time results. In Juniors, the gold was taken by now the fresh Czech Republic downhill champion Tomáš Horák, followed by just 0.15 second slower Jiří Matoušek, and by 1.5 second Tomáš Král. TOP 5 in men were, starting with the slowest, the first round winner Peter Gnip, with four riders of names starting with M. Matouš Matějů was fourth. His first time among the top 3 riders, Matěj Pospíchal was second. The always silver-taking Marek Petelík took, surprisingly, silver, and Martin Mitvalský defended the last year’s gold and became the king again. He was the only rider to beat the time 1:02. 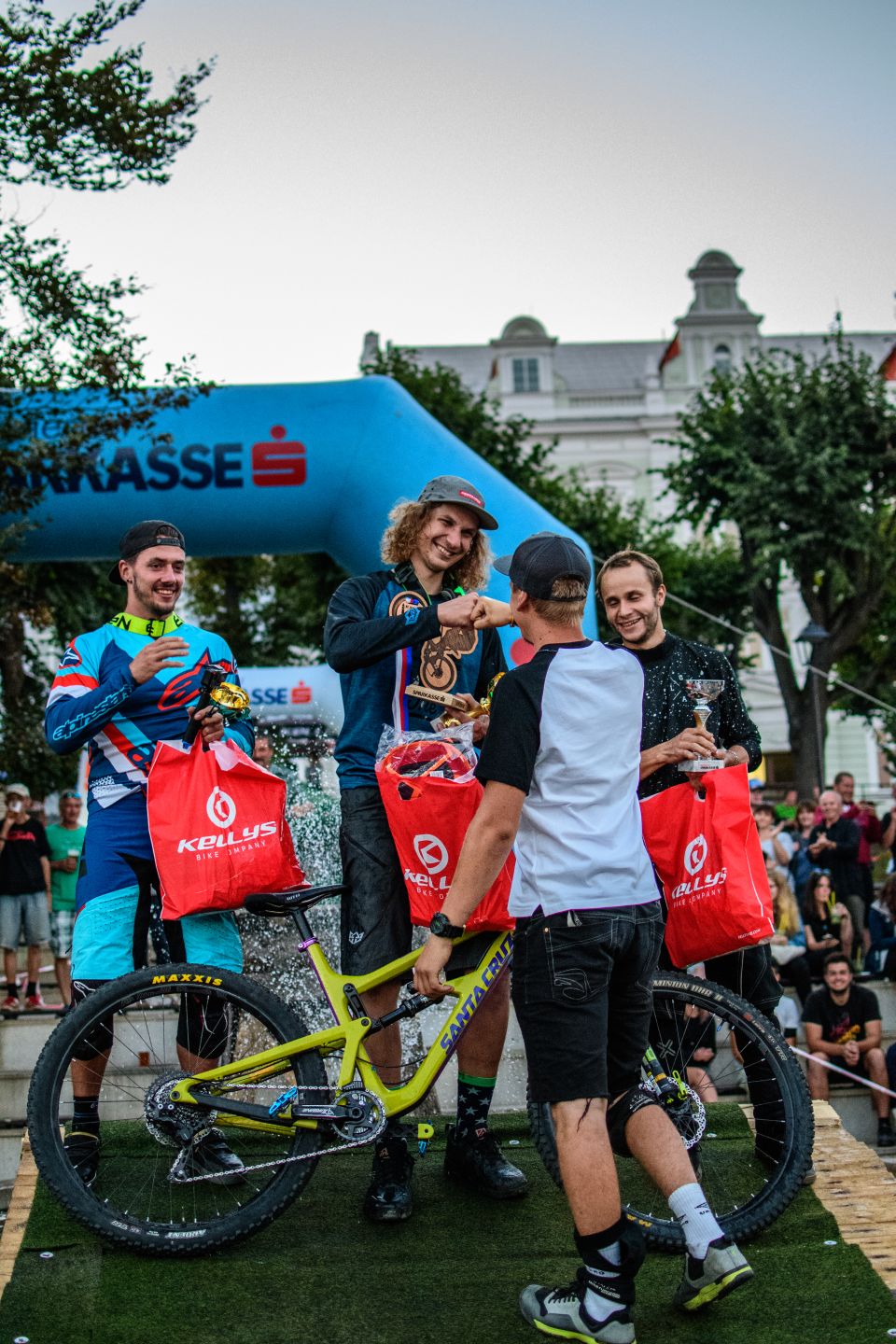 The results were announced at the ceremony in the place around the fountain. The representative of the general partner, Sparkasse, gave the winners their prizes. Cheering and applause. Does that mean everybody goes home to calm down a bit, now? Oh, mine, we are in Dačice, right? At the moment when Martin Mitvalský is showing his prize stretching his arms above his head, two local badass guys jump into the fountain. So there is a lot of water sprinkle instead of champagne. The guys are followed by local kids which makes the commentator announce the end of the race, and everybody leaves the place to follow the first tunes of the afterparty.

„Iwant to say thank you to Petr Kunkal, Adam Zich, Martin Šťastný, Lenka Fabešová, Mácha family and all friends who have helped me so much this year. There would be no Dačice donwtown race without you,“ says Alex, tired, and we know he means that. Well, tosum it up, this event has grown into a large-scale thing over the past three years. I know that it is necessary to change a lot of things before the following years because it takes more than just full heart to organize such an event and this way it could kill him. I have heard him say several times that this was the last time to do this. But I want to makethe end of this report positively. This show must go on. The thousand and five hundred happy smiles are worth it. Or are they not? 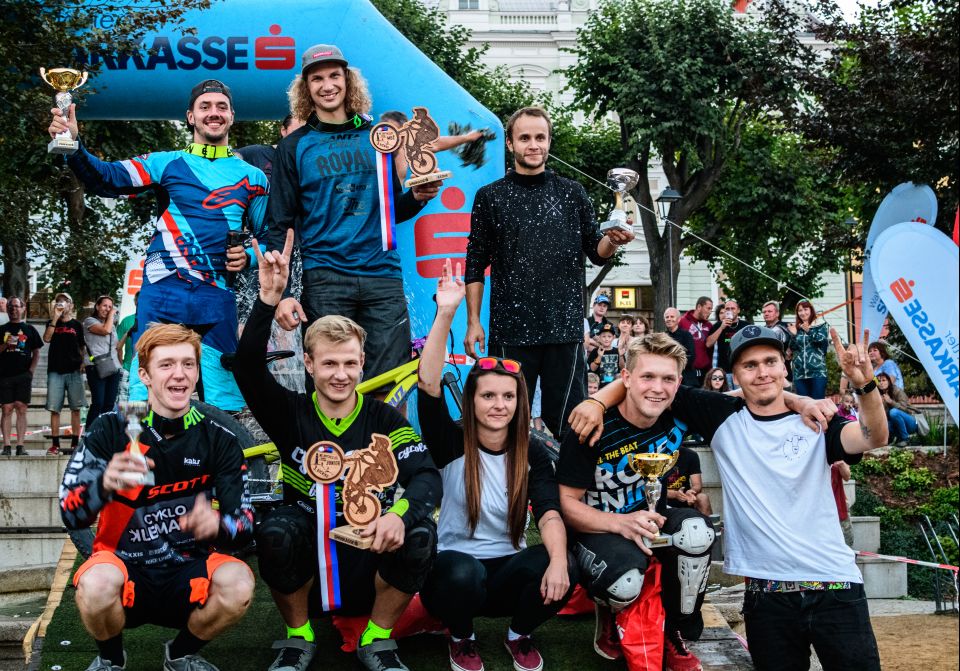