On the first Saturday in September, narrow-tyre-wide-handlebar buffs gathered at the last but one event of this year’s Czech Downtown Tour. So far, the town of Dačice had contributed the first cube-shaped sugar lump ever to the world’s history. And it was the guy known as Demo, again, to make cheering crowds come to its square. I had been to a lot of downtowns, yet this was my first time to see a Mexican wave. Mára Petelík and I arrived about 45 minutes before the race was supposed to start. Mára had proved he might easily work as a rally co-driver. Well, we were finally there. The track is 500 metres long, we can do this three times, easy peasy. 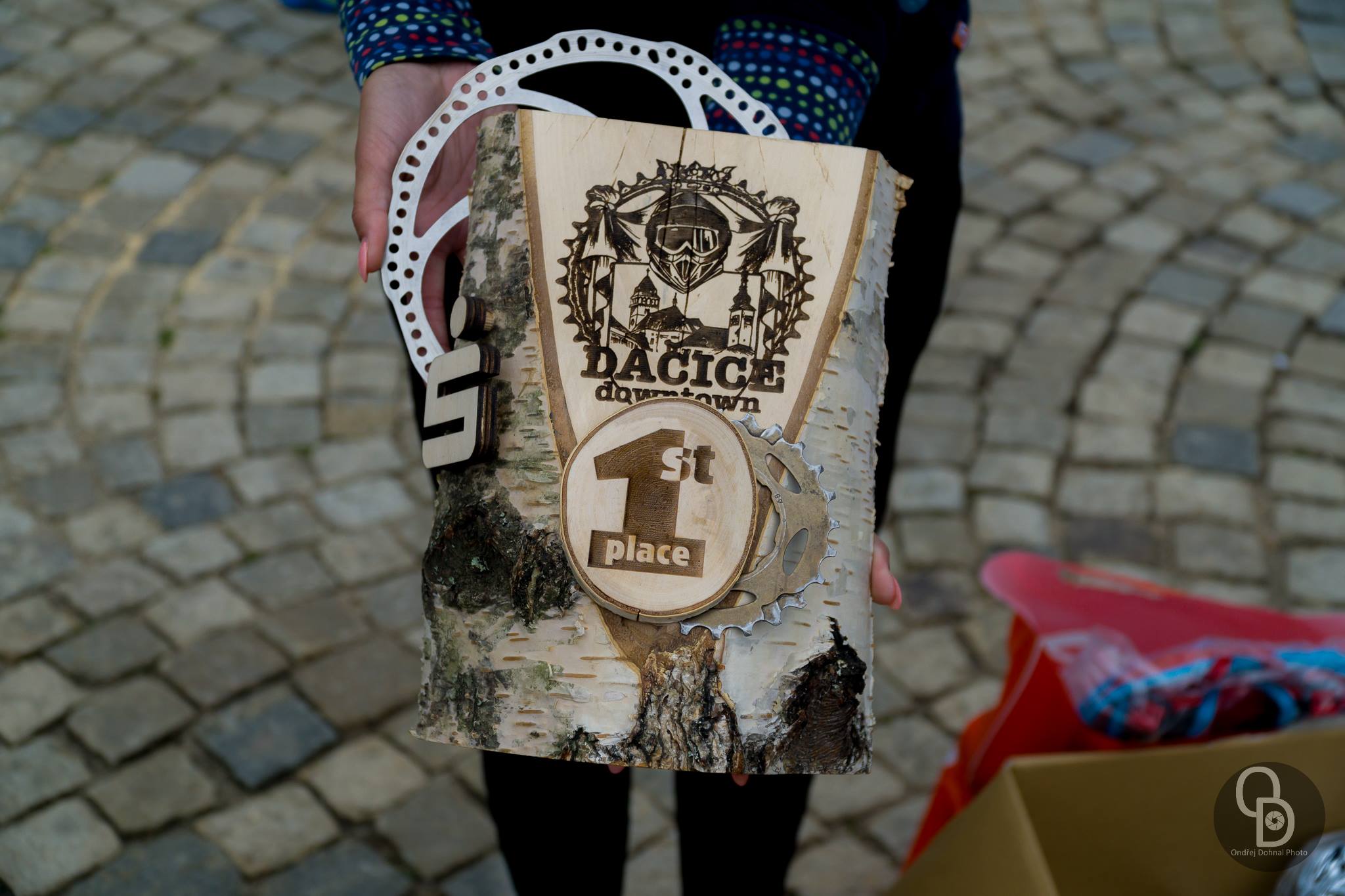 I want to mention one thing. Two days before the race, its manager announced that those who would get stopped by worries about rain from coming might be disqualified from year 2018 races. There were some riders who did not understand this well-meant poke, and contacted him to ask whether he was serious. Alright guys, is the world really going down the drain in such a way we stopped getting irony without emoticons? Well, those who didn’t come for rain suck, as it didn’t rain, after all. 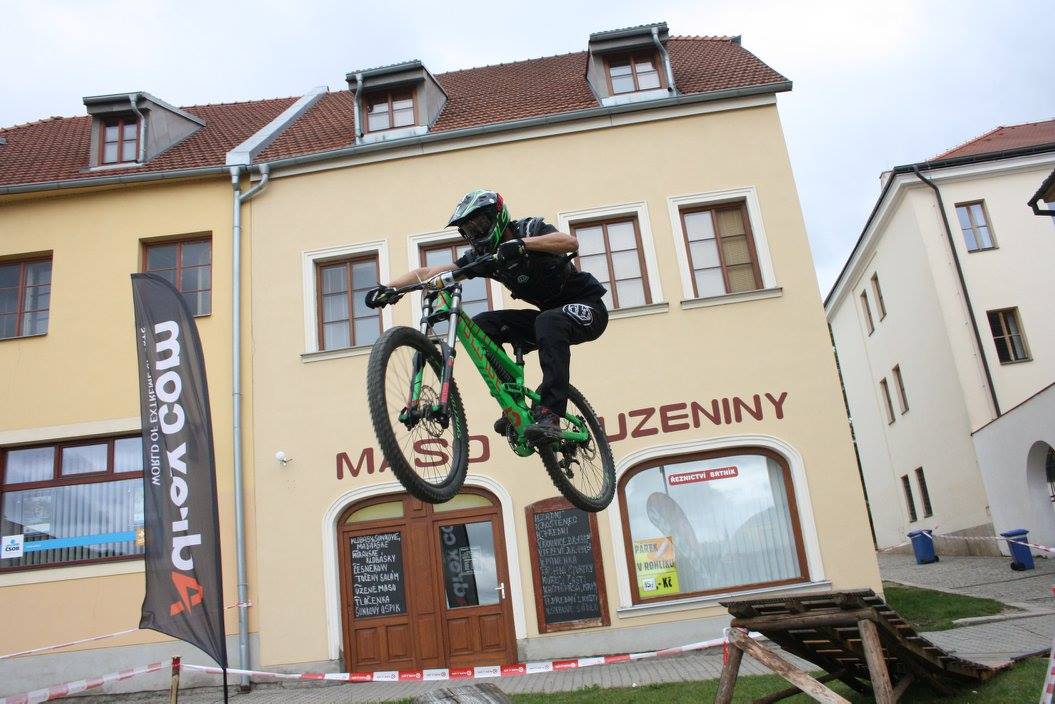 Though the track is the shortest of the Tour, it is the most technical one. There are no big jumps, but otherwise, there’s everything. And a few more things as a bonus. The start from the church tower door was fine, sharp left turn, ideally a bunny-hop over a pallet, high-speed 5 metres downstairs ride, a wall ride, a right turn on the grass, and a jump over Saša’s brand new car. Then to the right, dirt all around, you’re dizzy, a litter basket on your left, three steps, another right turn, a double over the wooden sculpture of the first ever sugar lump, sharp left, drop over steps, the crowd is roaring, your guts are boiling, the brake, the re-acceleration, the roar doubles, your guts are burning now, to the greatest over-the-fountain attraction, the tyres wet with water, your trunks wet with you-know-what-but-I-just-mean-adrenaline, left turn, slippery cobblestones, a step up, down the track and over a step, now to the mousehole, Go-Pro-oriented lost property office on spot. Speeding up to the finish line through a tunnel and a sharp right turn. Here we go. You did it!

So, how was the actual race? The event was started by a drum show by twenty kids led by Mr Jack – group Hakuna Matata. Interaction with the audience was excellent, and, once the last beat of bongo echoed out, Simona Jirková, the only woman among the riders started the race. Gotta tell ya, even the commentator missed the live start of Sparkasse DT Dačice. I’ve heard that 40 thousand spectators come to see this in South America. There even was a rider to have some water fun in the fountain in the first round. The noise was getting louder. 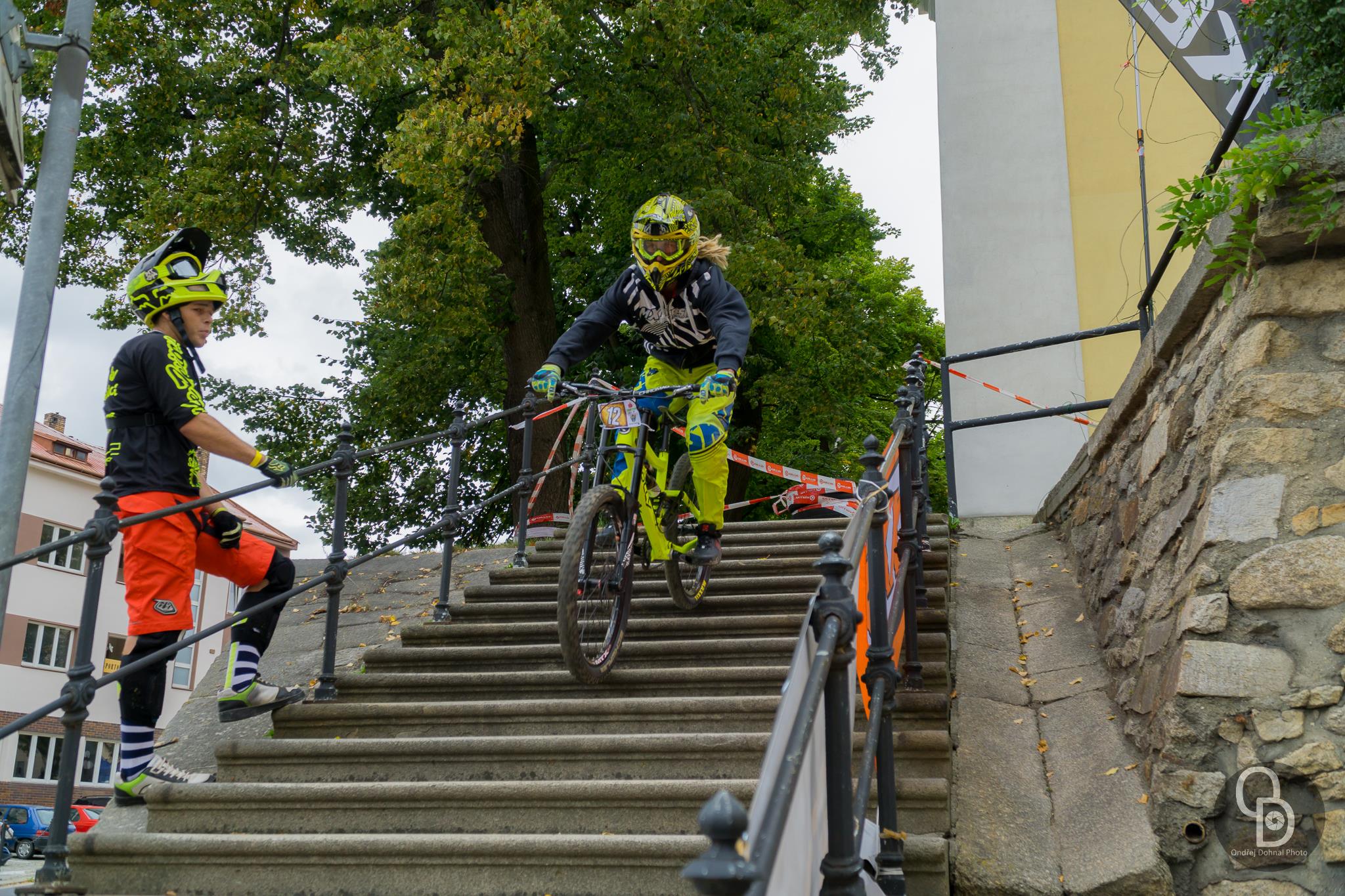 Two categories. Full suspension, hardtail. The Enduro trio Leták, Petelík and Mitvalský as leaders again, followed by Pavel Techlovský in his Czech Semenuk ride-style. Then a mixture of all the rider types, including us, old farts. Before the second round starts, there is some discussion and the race system gets changed. Well, the race apparently might have seemed too short with its 62 riders. It’s been a wonderful trial show so far, so we put our heads together, and Demo finally decides that the better time out of the two will count, with the finals as exhibition show. The second round starts. Everyone wants to hear the audience who echo with big roar. Sparkasse style, needless to say. Simona starts again, followed by the slowest riders of the first round. Now, full suspension guys. The atmosphere escalates. Another Mexican wave. Hearsay comes – people in South America are tearing their hair with envy. Super crazy. Results? Martin Mitvalský goes for the third place, our Tour ambassador Marek Petelík takes a medal, too, but the one who grabs the gold is an ex four cross rider Petr Leták. All these three guys, and no one else, come in less than 50 seconds time. 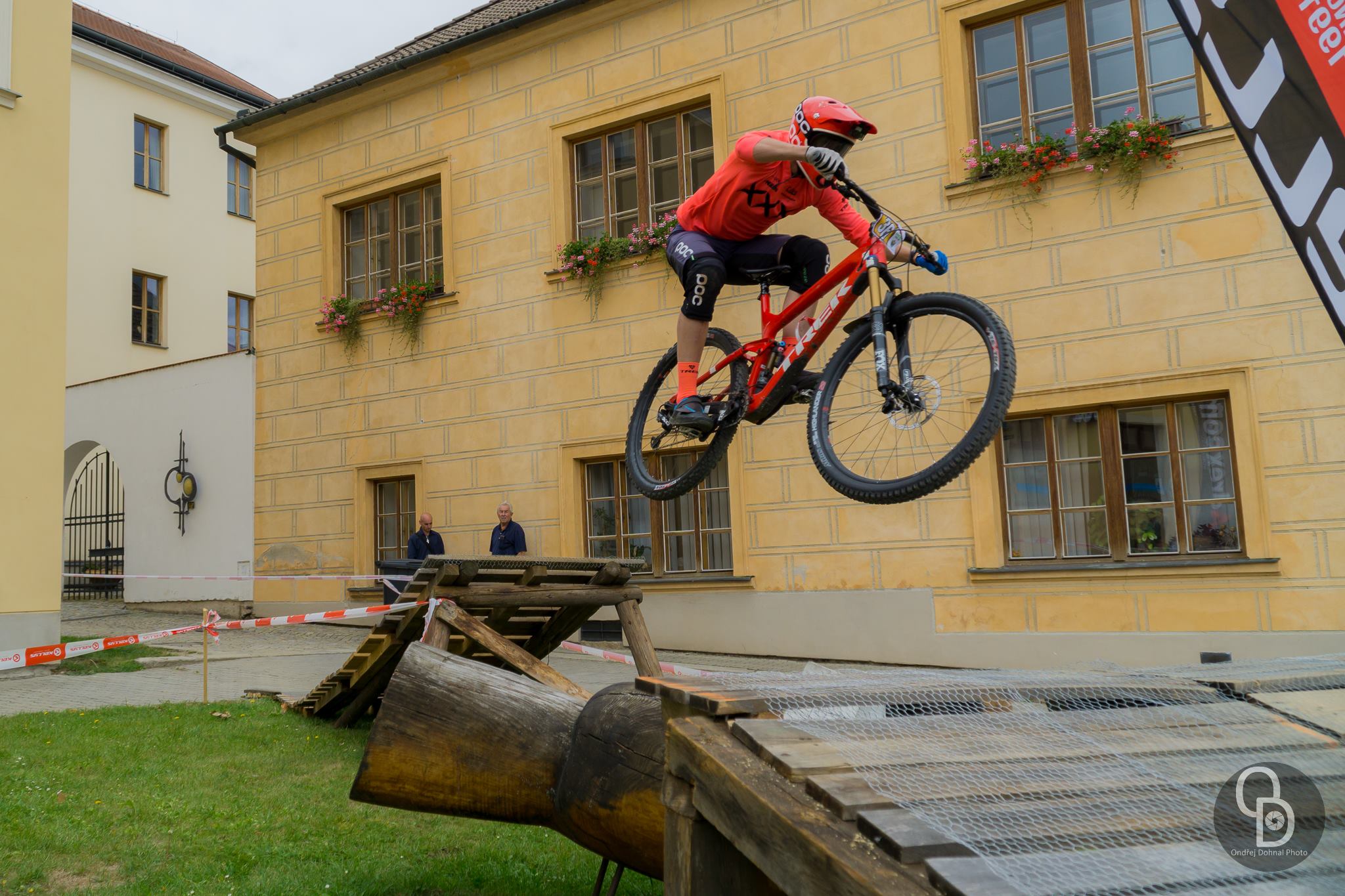 Then Demo decides the finals will be a train-chain of the best 50 riders who never fail a jump, no matter what over. Chattanooga Choo Choo never seen before. The crowd in the square have already lost their vocal chords, so there is dead silence, the craziest soundtrack ever. The winners are announced, the prizes handed over. Demo crew did a great job. They deserve our loudest handclap and our most grateful words of thanks. 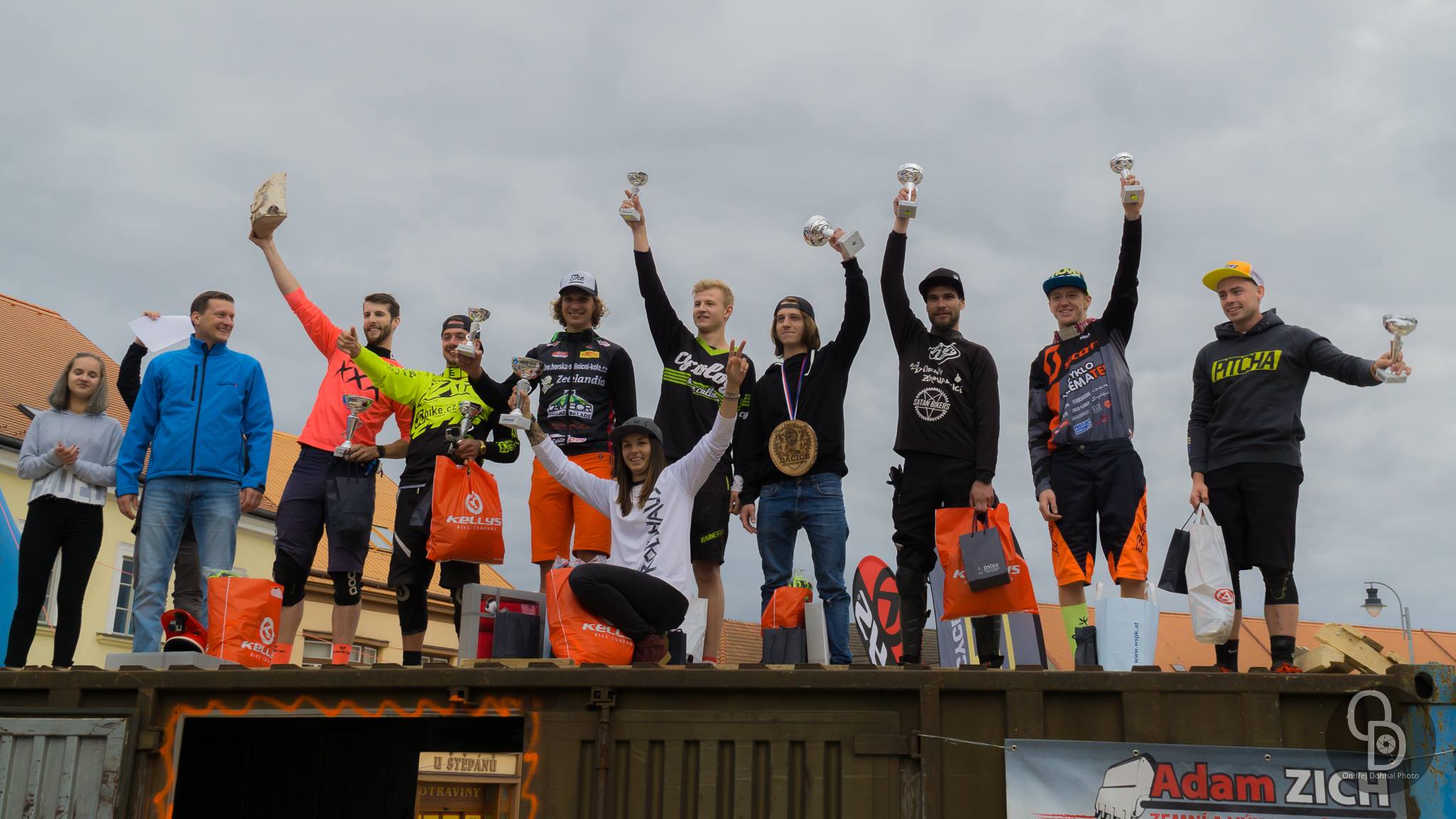 Demo: Hey, thanks Stráňa for the fantastic report. Believe it or not, he sent it at 8, Sunday morning! The time when the downpour started and woke me up in the square in Dačice, after the short night following the insane long party. Thanks everyone for coming, riding, making a show, cheering and encouraging me and the crew. Thanks to my friends for the week-long hard work. Thanks to the sponsors, too – Sparkasse, the Town of Dačice, Swat, Zemos, Cyklosport Kunkal, Bikesport Joma, Motoservis bert. Thanks to everyone!

It was great and, hey listen, now a teaser is coming, there will be some very attractive changes to the track in 2018! Stay tuned and don’t stay on your couch, come to Dačice next year! 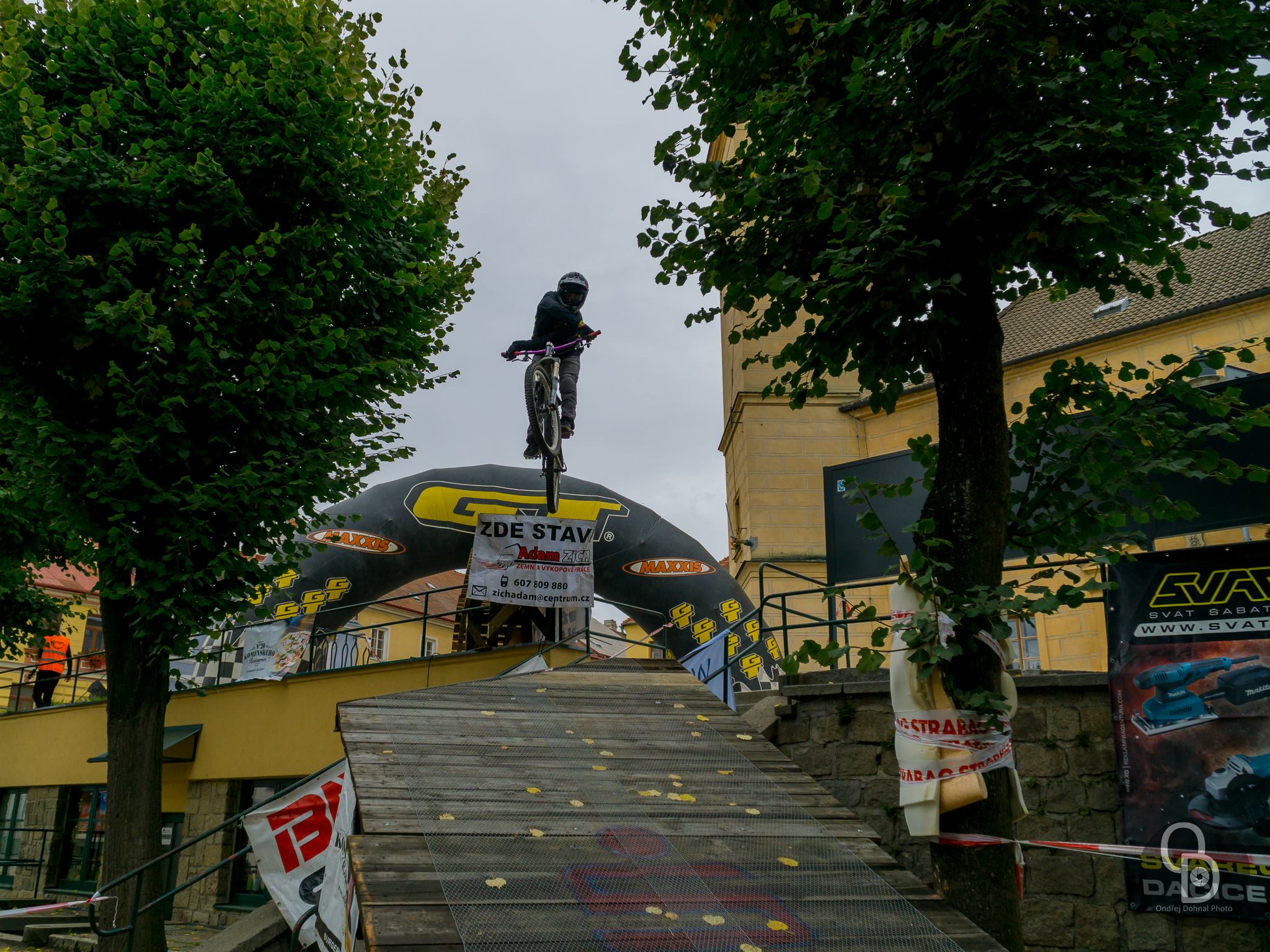 Dačice Sparkasse Downtown. Street, heart – you are not on your own. Just hold your breath and… WOW!