Though the seventh year of UL-LET downtown is over, riders and spectators are going to remember this event for a long time. Friday’s night Dual was thrilling, giving a great opening to Saturday full of things never seen before in the centre of this city. 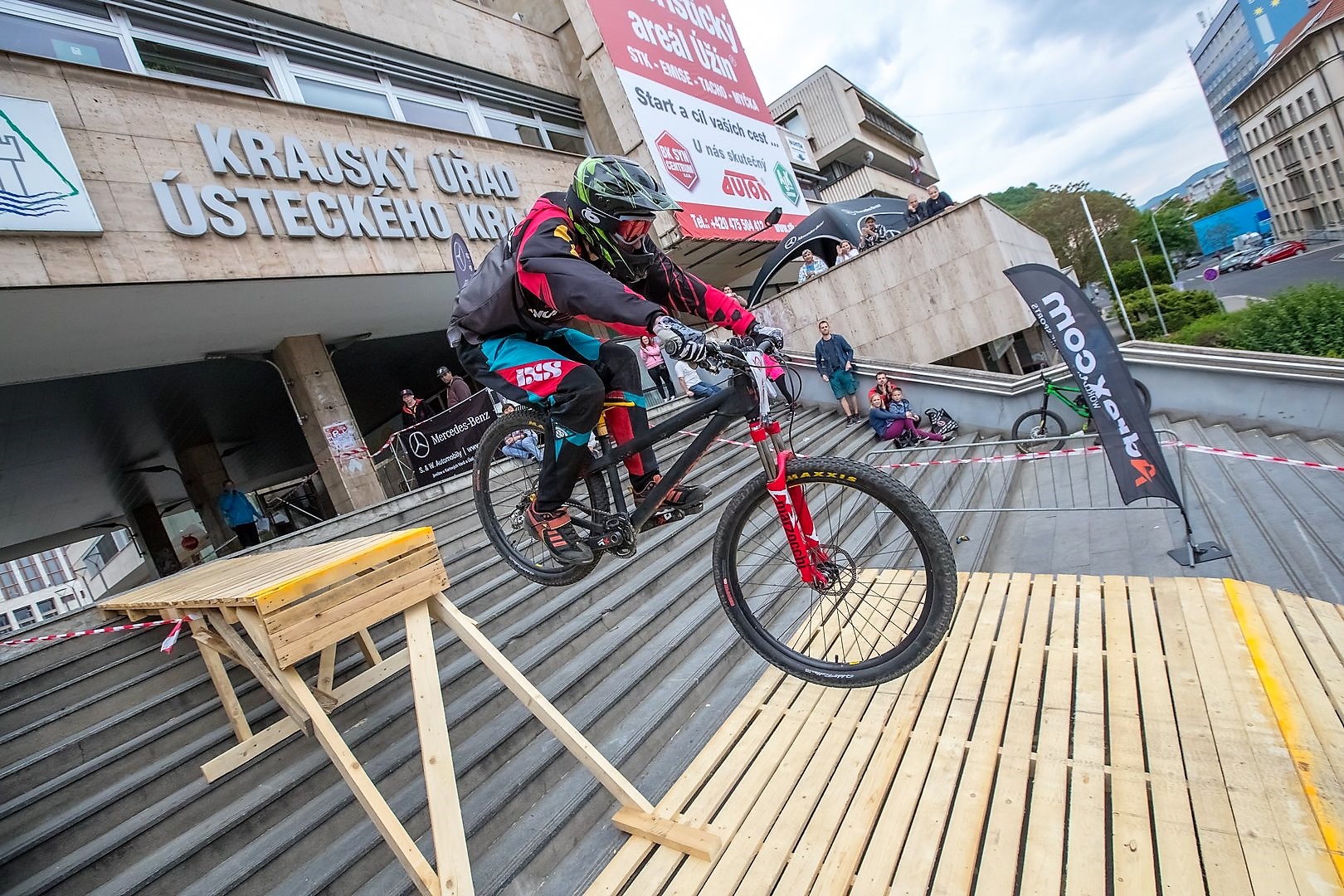 20 riders gathered at the starting line of the Dual. After the qualification round, top 16 riders got their positions in the elimination round chart and everything was ready. Darkness, spotlit trail, jumps in full colours and a pair of riders flying over Mastodont. Along with a short good-luck touch-and-play with the wonderful front-top part of the beautiful race starter girl, this made butterflies come and tickle the stomachs and underbellies of every single rider. This is something to experience, not anything to be written about, though. Around two hundred people accompanied by WBS director Jiří Haff’s commentary cheer the athletes to heat them up and encourage them to show wonderful feats. The great finals between Růžovák and Demo were breathtaking. And we whirled the wheels even faster with the Whip contest. Six girls divided points among thirteen guys. Not only by the size of the whip trick, but also by the way the rider’s bum was whipped. The winner was Filip Dankanič, just before Růžovák and Michal Beck. 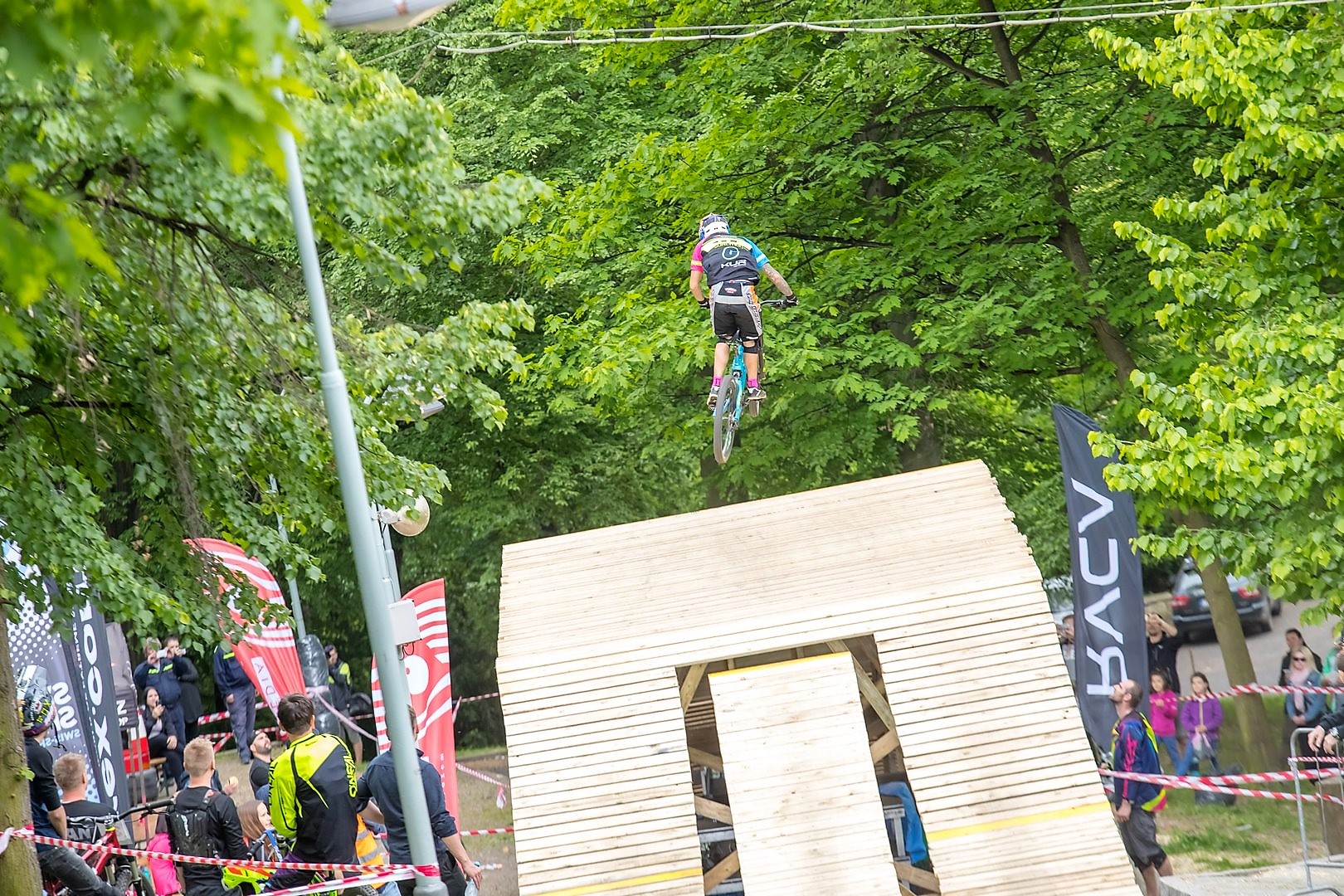 On Saturday May 20, a long awaited moment finally came. The first downhill race of this year. Though I had already been to two Enduro events, the first time I meet my downhill rider friends at an event is the moment every season really starts. Well, it depends, which race is the first, but I hadn’t been able to attend the event in Jáchymov. That made UL-LET in Ústí nad Labem my first race of the year where I was not made to pedal uphill. 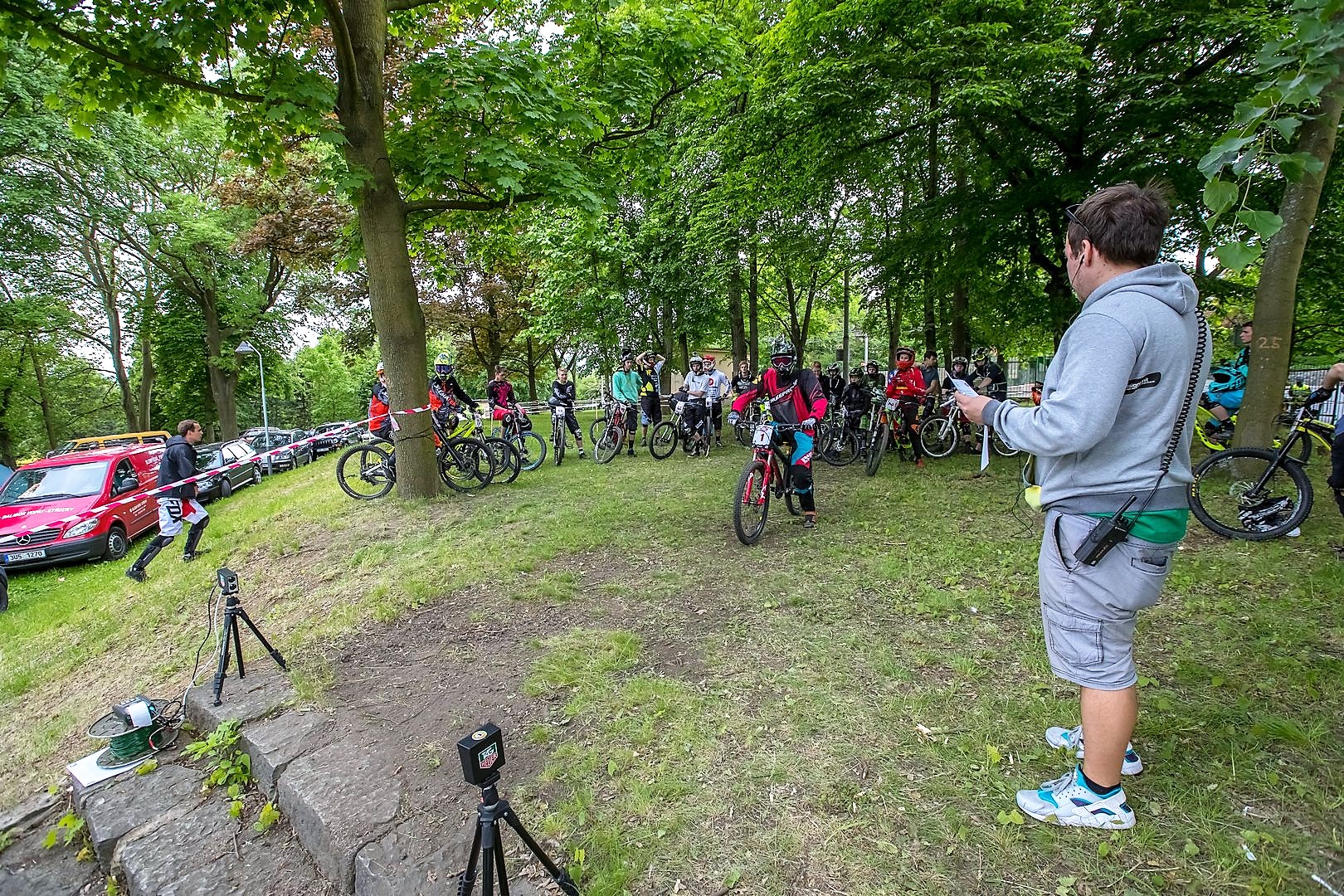 Well, enough! No more sentiment of a man who has just started riding in Masters this year! What was Ústí nad Labem like on Saturday? What was the programme? Fair enough, everyone had been prepared for a new trail. The trail scheme had been available long before, yet what were the obstacles? This made us visit the trail shortly after we arrived. The starting line at the traditional spot, acceleration at the stairs and… the first alteration – absence of the drop and its replacement by a diverted traverse which took us directly to the stretch before Mastodont. This obstacle is sure going to stay, in one form or another. This year it had a good take-off ramp and two more from the previous night’s Dual show. 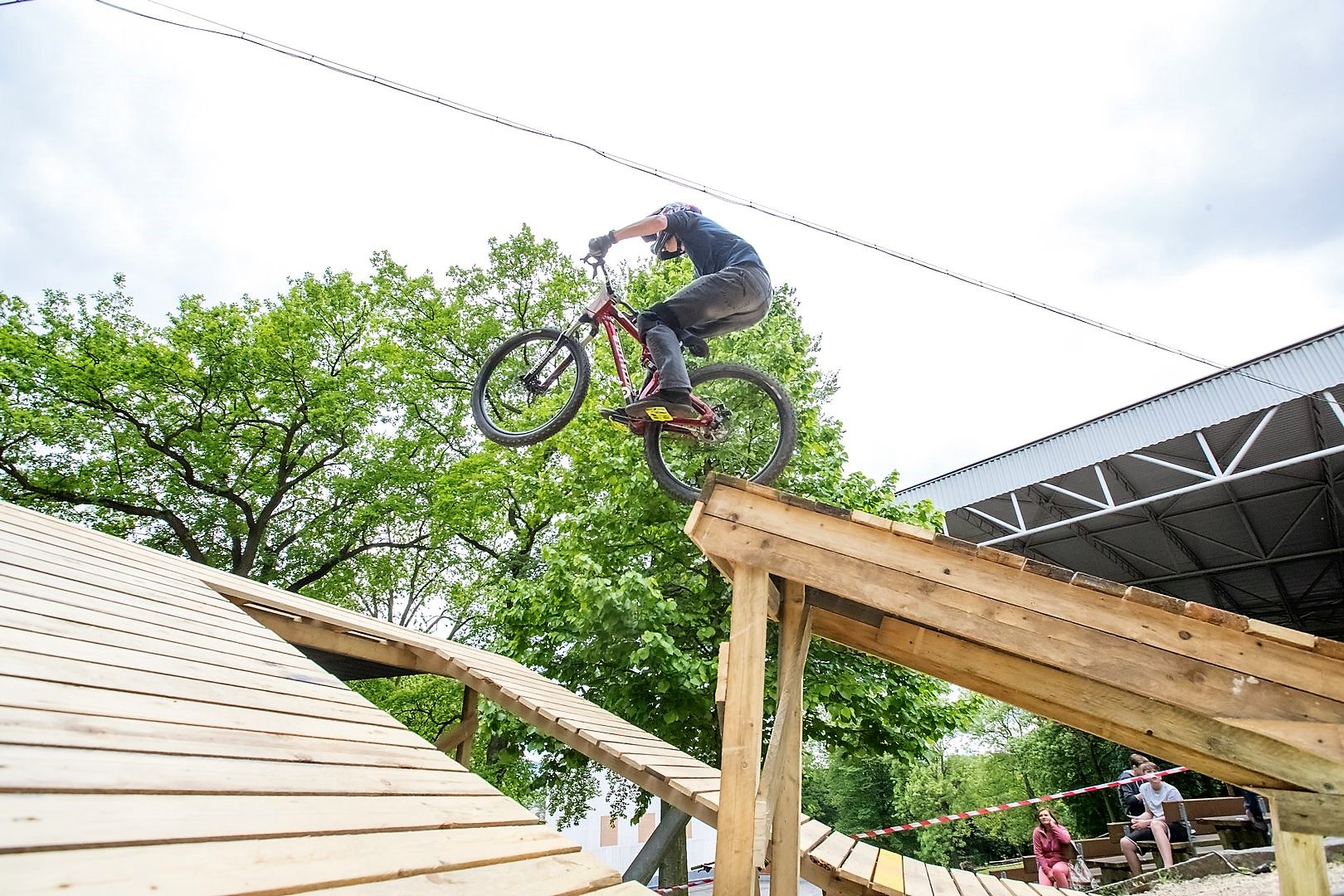 Just after, Mastodont we swerved right (it has always been left up to now, yet this year we finally went out of the open air cinema) to the grass, then across a fairly hard wall to a long straight, dropping significantly. Here, some fun would have been more than welcome, as this section was a bit boring. Then the trail sped up, just before a sudden brake-grinding moment to take a tricky left-hand curve which gave a lesson to a lot of riders whose tyres failed and made the athletes fall down. The following minor uphill section led the riders through a double-staircase. It would have been possible to take the inner flight, if it hadn’t been closed for the race. That’s why this part was so difficult in the first qualification round. 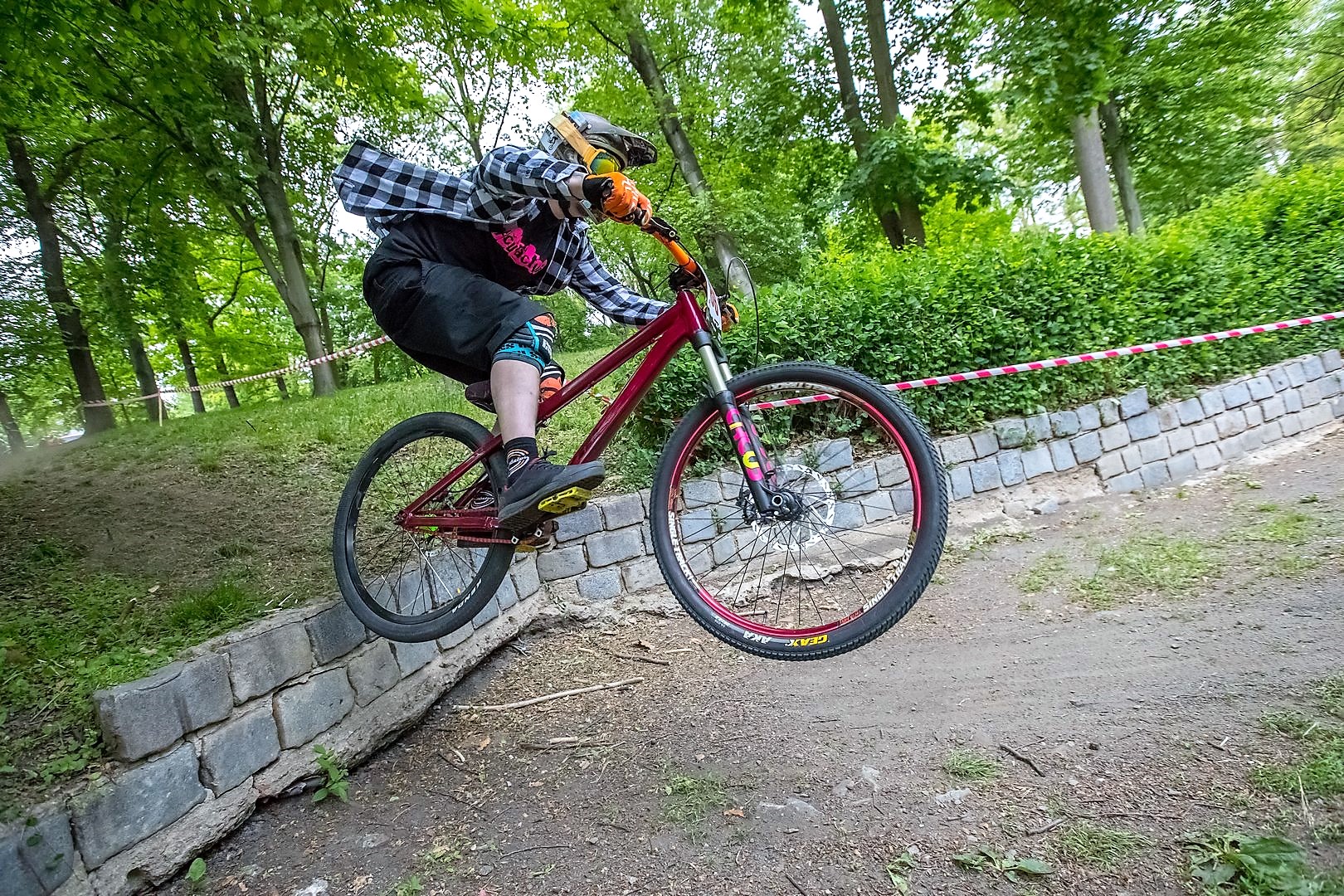 The next stretch with its nice jumps took us pretty close to the city centre where we the roar could already be heard of the crowd gathered along the home stretch. The stairs in front of the Culture House gave us the right speed towards the crowd. While sprinting towards the final obstacle, it was possible to listen the commentator and learn some information. Then came a stair gap, one of the loveliest and most wonderful obstacles recently seen. Afterwards, just a banked bend and the final slightly uphill oriented sprint before the finish line brought our salvation. This was the new trail in Ústí nad Labem. As far as I can say, it was pretty cool. Big and safe jumps, varied pace, a great crowd of supporters in the finish, and not too many boring sections. 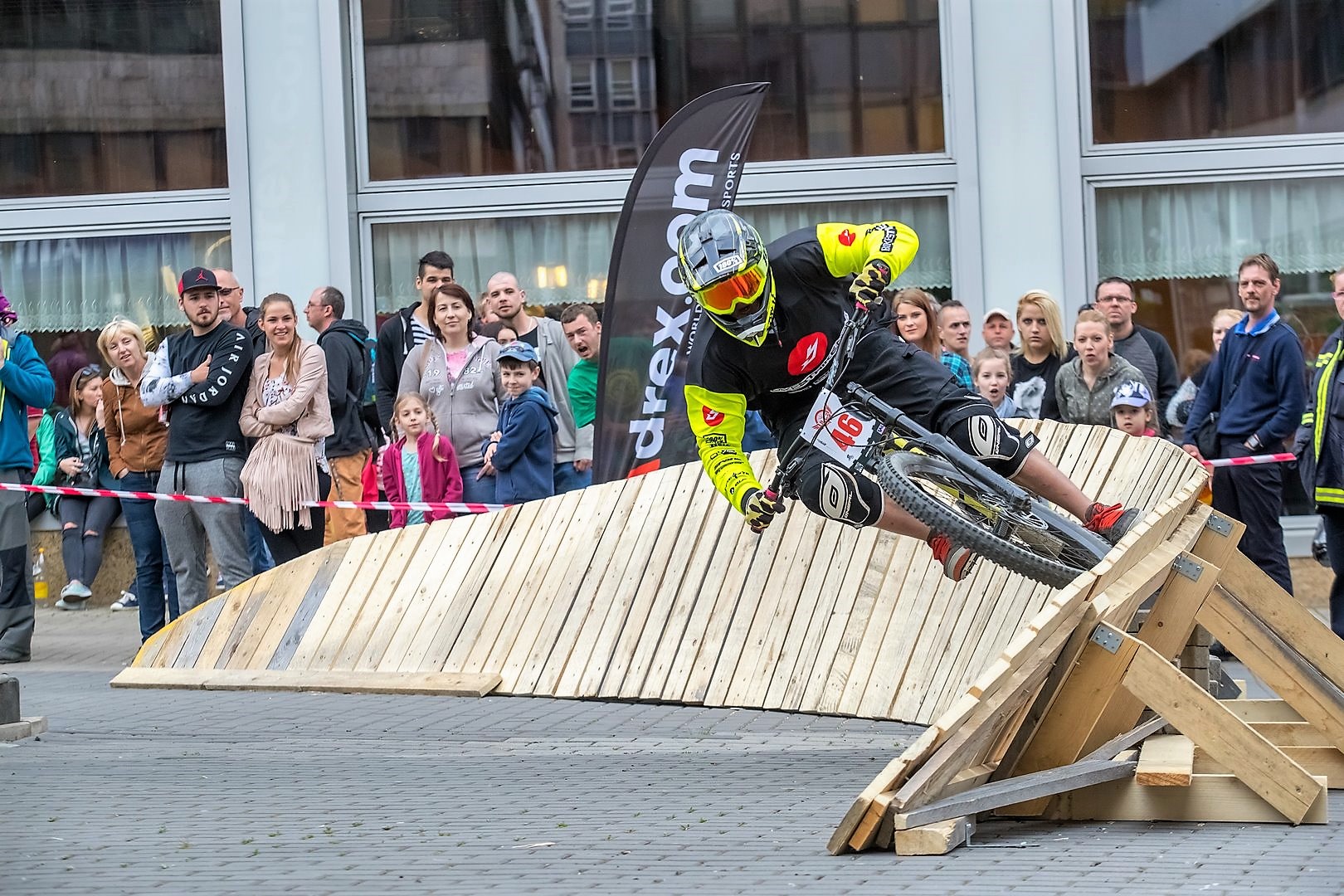 Even though the trail description has been quite long, what riders showed there was much more interesting. Although last year’s Czech Downtown winner Jakub Říha was missing, there were still a lot of guys who regularly take top positions in races. In the two-round qualification, the fastest rider was Martin Mitvalský, the only participant on a 29“ bike. Mára Petelík lost just a second, followed by Dan Čapek, Šimon Mánek, Martin Krejčí and slightly indisposed Hynek “Růžovák“ Strouha. TOP 20 of boys, two little ones and girls then gathered for the finals’ start. 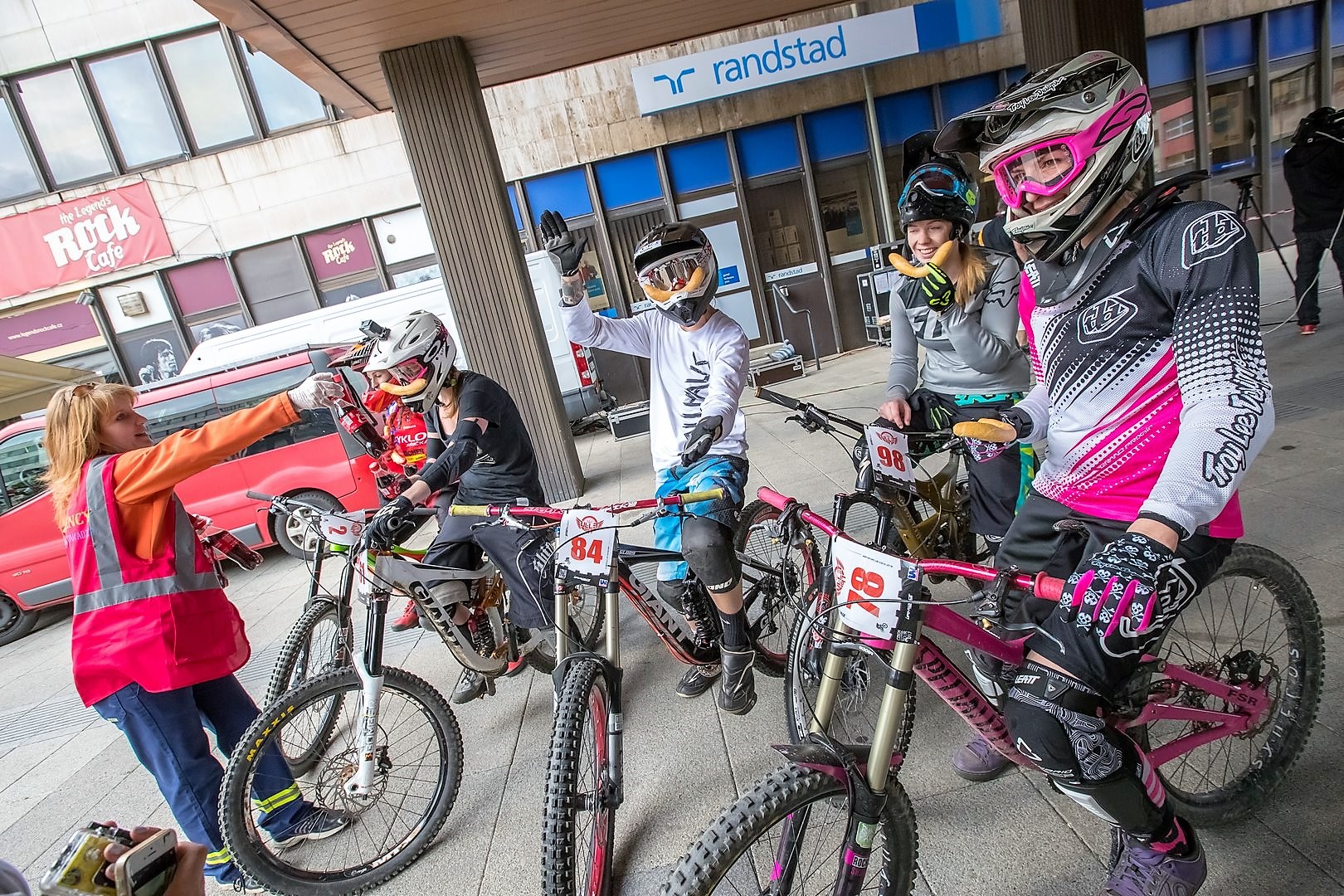 Girls were first to go. Ladies first, right? The commentator got news that the girls had agreed on a train ride. The qualification results would be kept as the final results and the ride would just be done to please the spectators. Despite her last year’s spine-chilling fall on Mastodont, the first place was therefore taken by Simona Jirková, followed by Šárka Dušáková, Iva Coelho, Lucka Juricová and Barbora Venkrbcová. 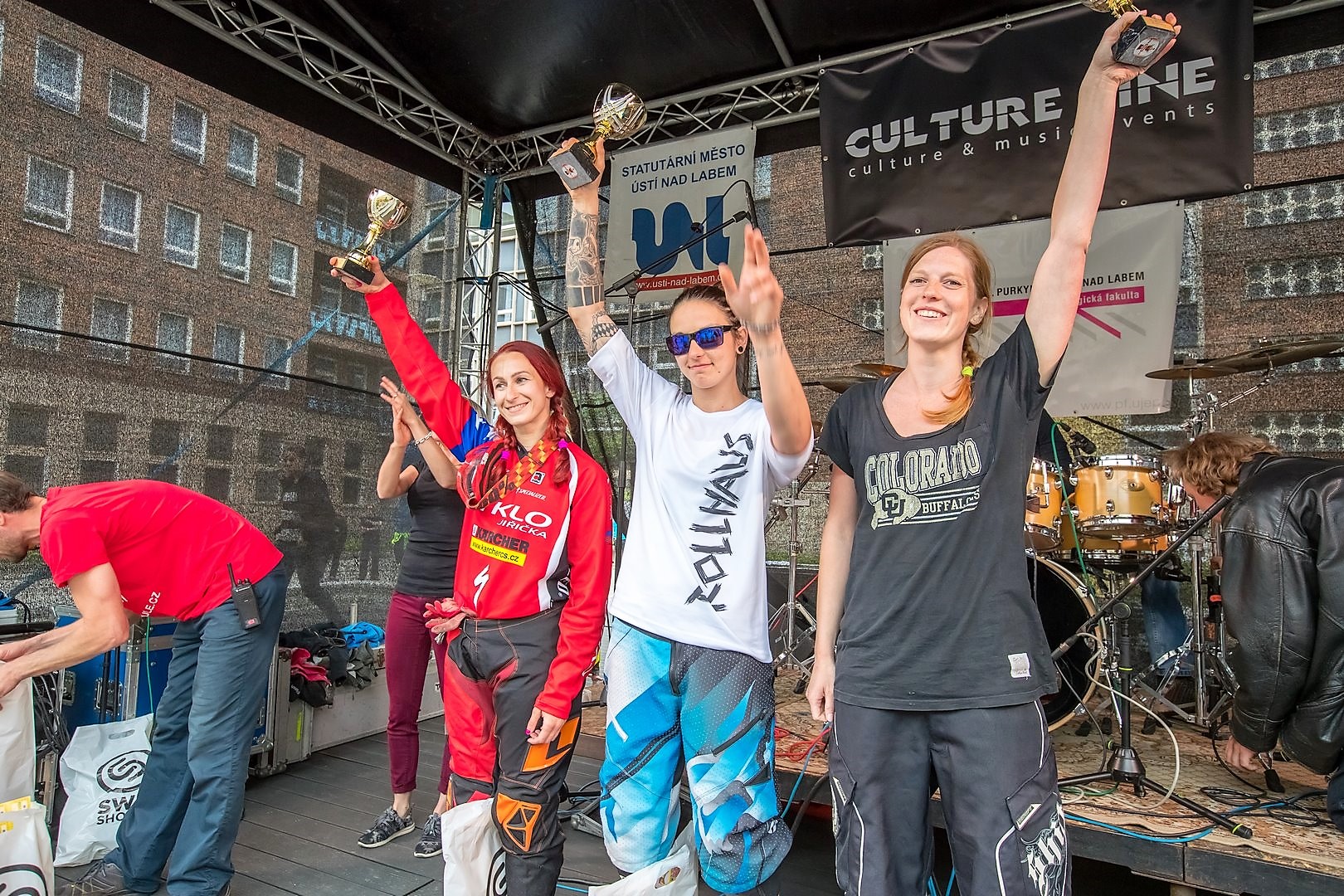 When girls finished, two young devils made it down the trail. I’m sure this is not the last time we hear of them. Fourteen-year old Franta Růžička and, believe it or not, nine-year old Nicolas Reinl did all the jumps (even though they took Mastodont from a lower ramp, which was a problem anyway for a lot of the other riders) and finished the trail in great times. 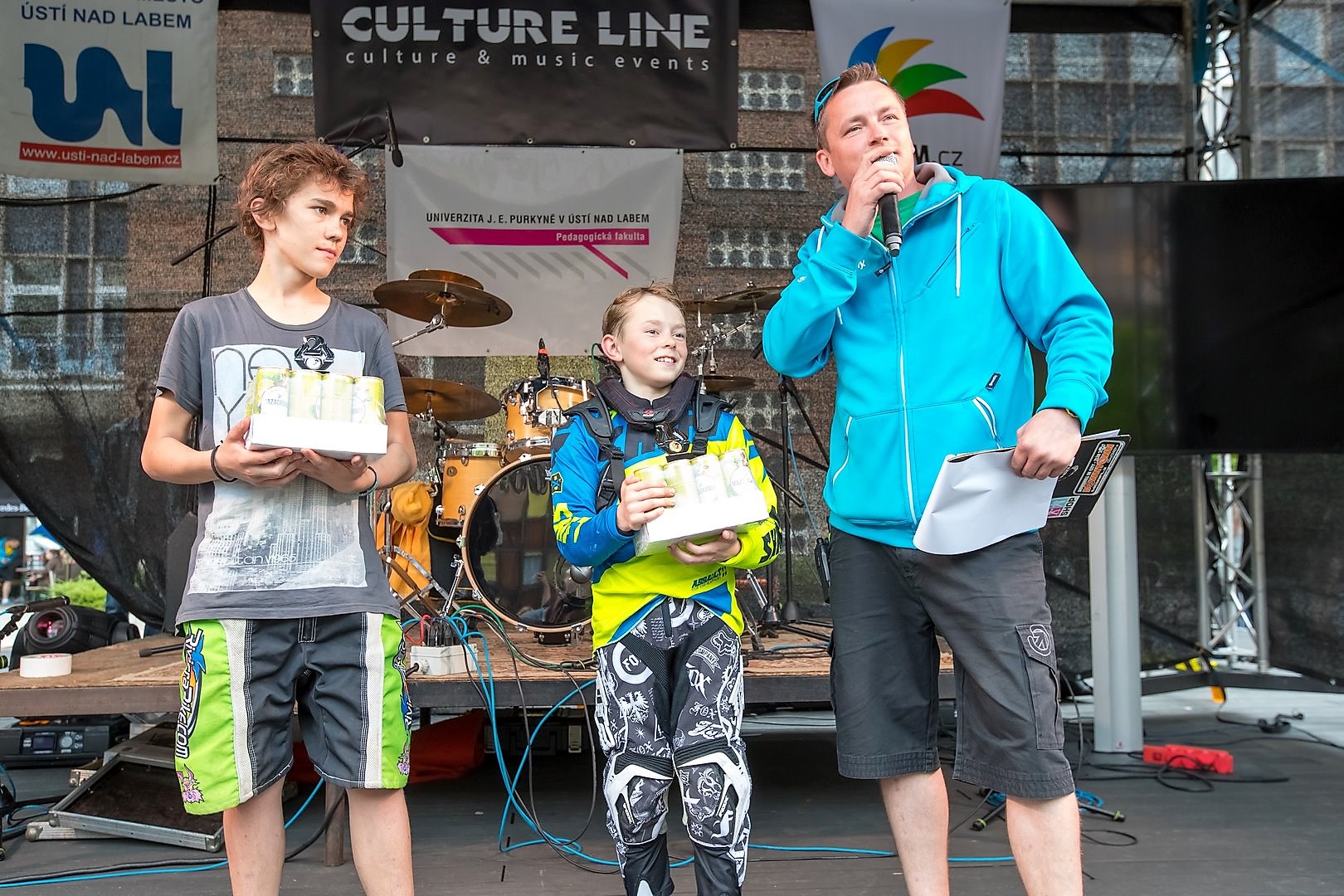 Now there was time for the genuine finals. 20 top riders who’d made it from the qualification round. Times were still better. The fifth position was taken by Pavel Techlovský, a guy competing on a fixed-gear bike. Daniel Čapek was the one who got one step higher. Bronze was taken by Hynek Strouha with his time of 1:13:19. Mára Petelík made it less than a single second faster, yet no one in Ústí nad Labem managed to beat the 29“ wheeled rocket Martin Mitvalský who flew through the finish line in his time another second faster. Then the decoration of winners in the atrium of the municipal office and concerts and more fun for those who stayed even after the race. 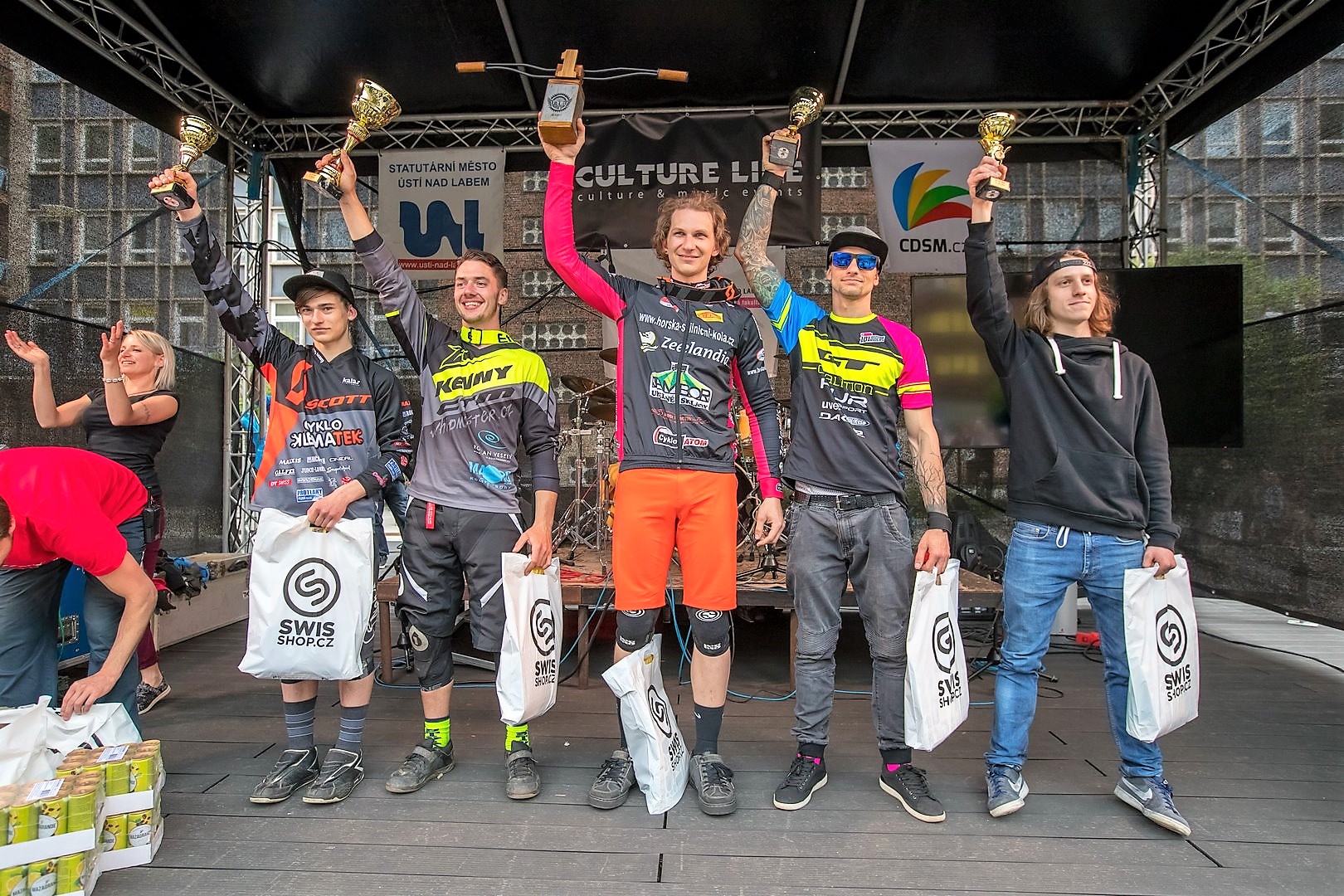 That was the event in Ústí nad Labem. The highest time to start training for the following race of Czech Downtown Tour in Rakovník at the end of July. Anyway, don’t miss the greenhorn of Czech downtowns in Příbram on July 3. The trails of both seem promising, so I hope the whole downtown community meets again in two week’s time. 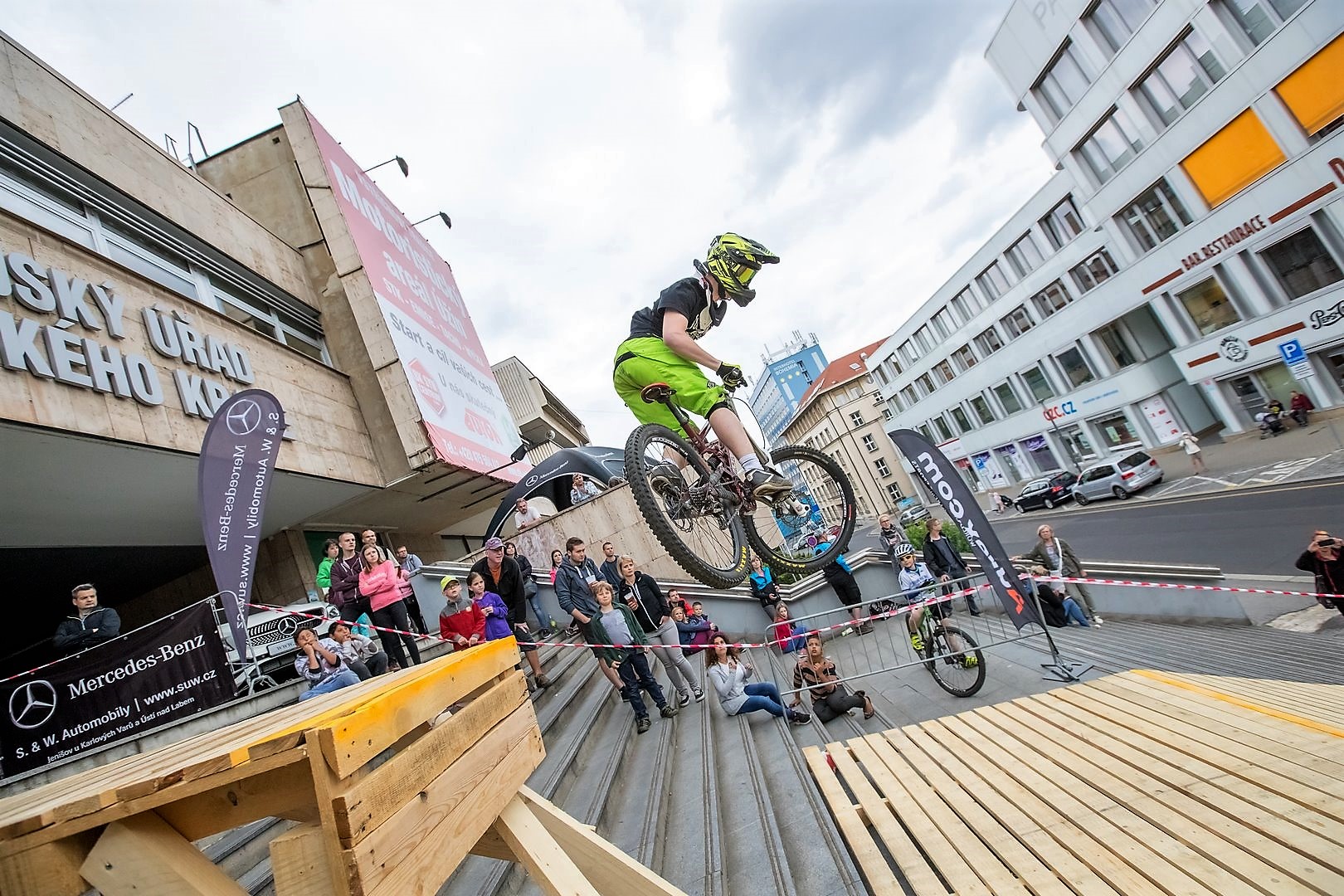 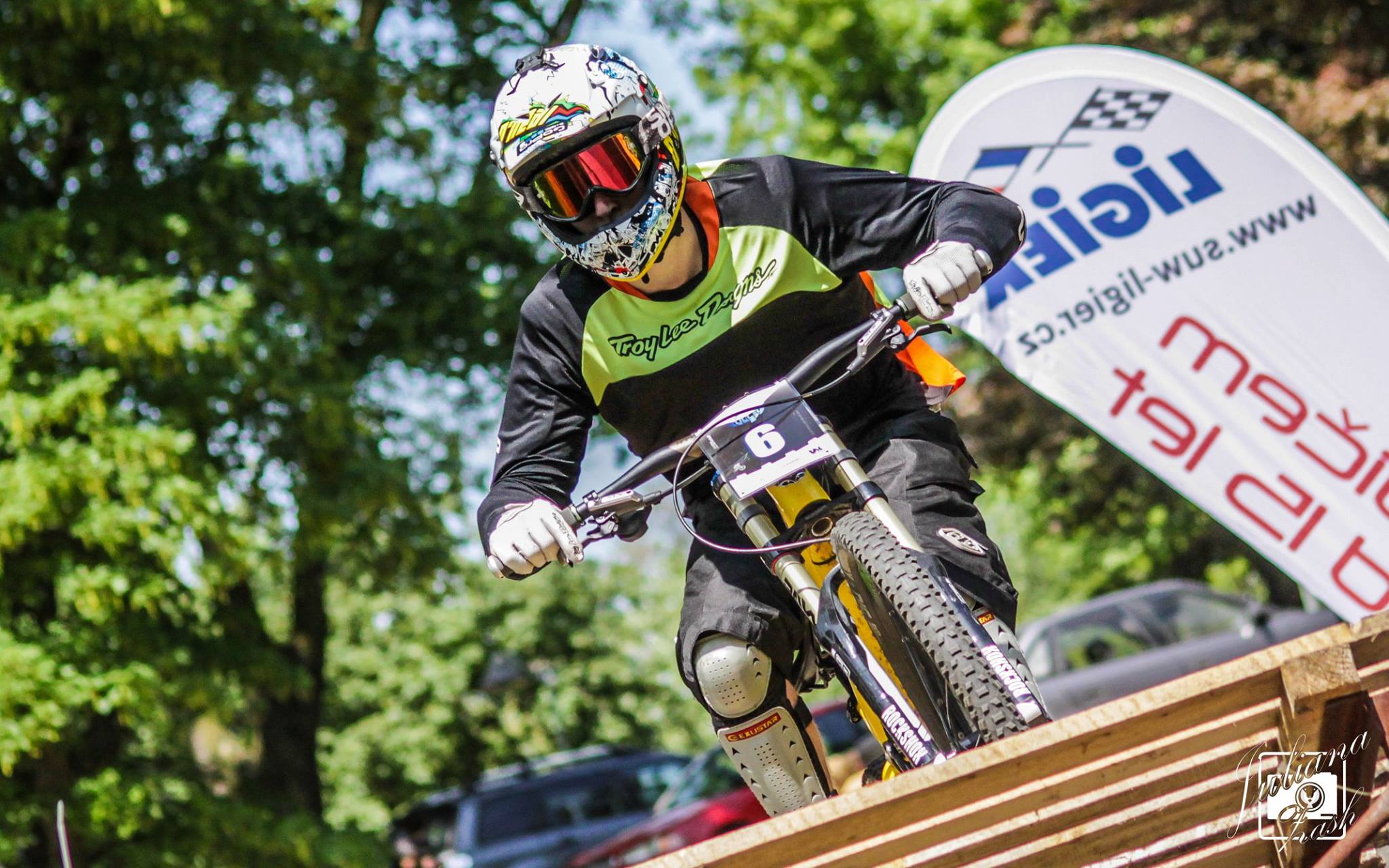