The opening event of this year’s downtown season was held in Cieszyn, Poland. It was a city center dual slalom, including more than ten Czech racers.

The track? A double, another double, barrels, a longer double, the longest double with a safety feature, berms, logs, logs, a bend with barrels, a double, steps, finish. The mental gap between a 5-metre bench and 5-metre rim/rim is well known. At least I got goosebumps when I saw the first attempts of the local guys. On top of that, the wind we are blowing in has been pretty strong since early morning. I mean pretty, quite remarkably strong. 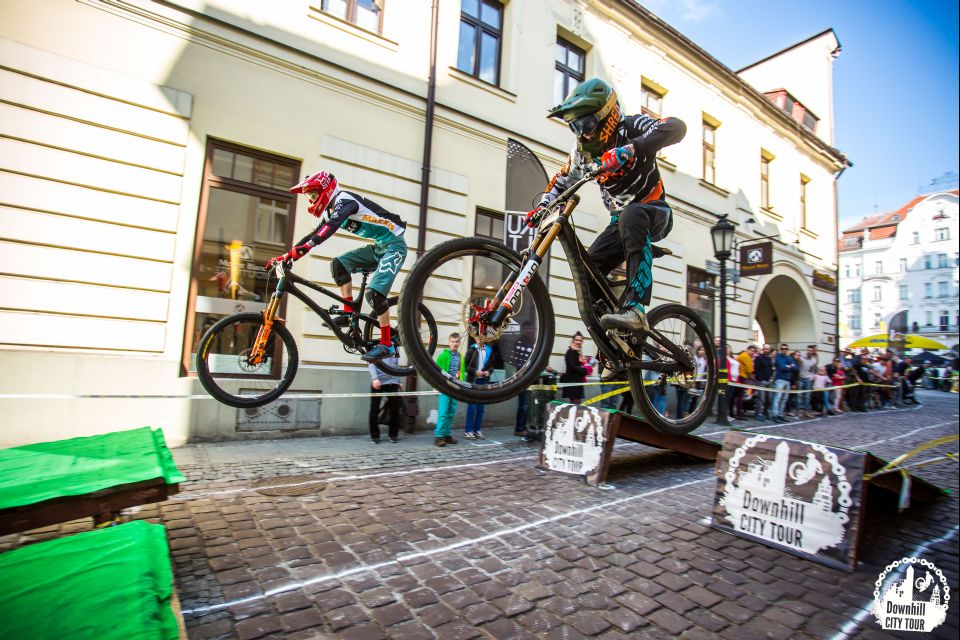 Well, we did not travel so far to skip obstacles. Franta and I go for all of them but the biggest, Saša rides his borrowed Enduro Kellys  XL with no skipping at all. The wind ceases not. It has already taken away some parts of fence and an organiser’s tent. Still, there is sun, music, stalls, pumptrack and all the jazz available at a single spot, in the city square. Now let’s go for the qualification.

The system follows numbers of the racers. My number is 61, so  get paired with a guy with number 60. We ride twice, swapping sides for the second time. Both ride times add, giving the total result for the qualification. The first 16 riders from category OPEN where I am taking part get to the elimination round scheme. The same goes for categories Junior and Elite, but with only 8 to qualify, and Women, where all 4 riders qualify for the final round. This system is different from the common system where there is only one qualification round. Okay, this makes it more fun and more just. In category OPEN, there are about 40 riders, so it will not be a piece of cake, nor a piece of bike. 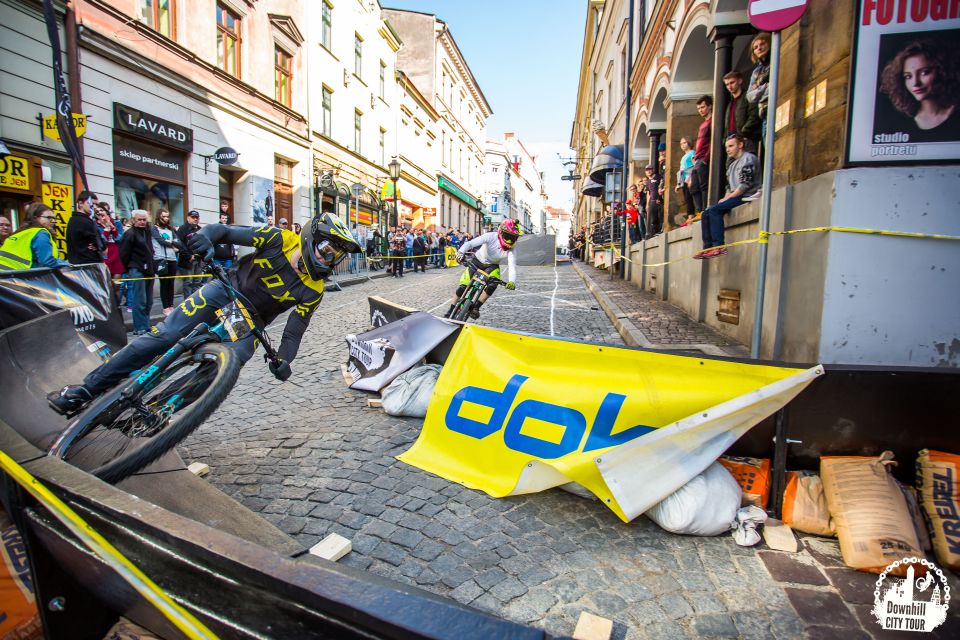 Saša wins in both his rides easily and takes the wonderful second position in the qualification. Right from the start he becomes popular with the Polish girls in the audience and his signature whip sets their laps on fire.

My co-rider in the qualification rides a Nukeproof Scalp. So it was just the suspension which made the difference. We have a short chat, he does not go for many jumps he says, should be easy for me I believe. And so it was. I won both the rides and waited for results. 18th position, 0.4 second loss for the 16th position guaranteeing qualification. I was not exactly happy, gotta admit. Out of 20 juniors, Franta is 11th, losing 2.5 seconds for the qualifying group of the first eight. So what is the plan now? To support Saša.

In the elimination round, the cheering of the growing crowds gets louder. Hundreds of people along the track, others in the city square. Definitely over a thousand in total. The commentator pumps the atmosphere up. Sáša whips it at the biggest double, he seems to think he is in the contest already, and he wins. Two aces did he still have in his sleeves, though. 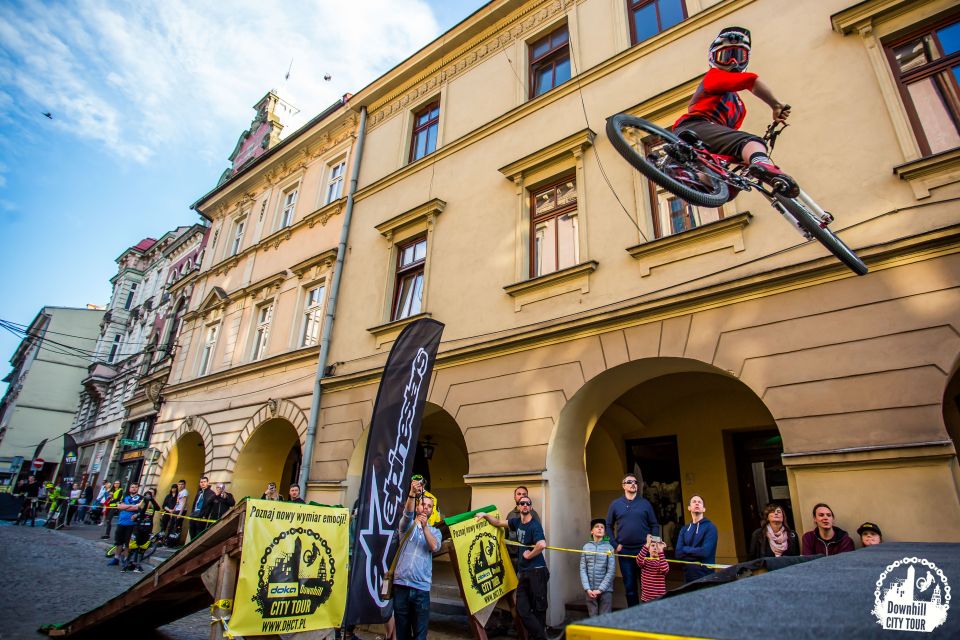 Second ride. Saša is on the right. He is winning. He is leading a big deal. Now here comes a bird. Right into one of his wheels. Sáša gives the bird a ride. A long one. 20 metres or more. I swear! He stops pedalling for a tiny second. The bird disappears. The crowds go crazy. Now the whip again, a brem, everything is okay. Still winning. He jumps the last double before the steps. On the right, I say. The first steps – pure beauty. The steps down he jumps flat. He slides to the centre a bit, nothing serious though. So now the finish already? Not really, there is still the barrel. From the left, let’s say? Well, now the finish comes too early. He gets disqualified in a friendly way. He knows he has screwed it. That would be it.

To sum it up. The winner is Ben Moore, Gustaw Dadela takes the silver. The event is perfectly organised, there are a lot of people. The wind was not very helpful and one of the riders made an unexpected trip into the crowd. The ramps had to be fixed many times. Both riders on the track always had full attention, as the next pair had to wait for them to finish the race. That made the race a bit slower, but it worked quite okay. The atmosphere created by the audience was fantastic. And that is what makes city racing so exciting. 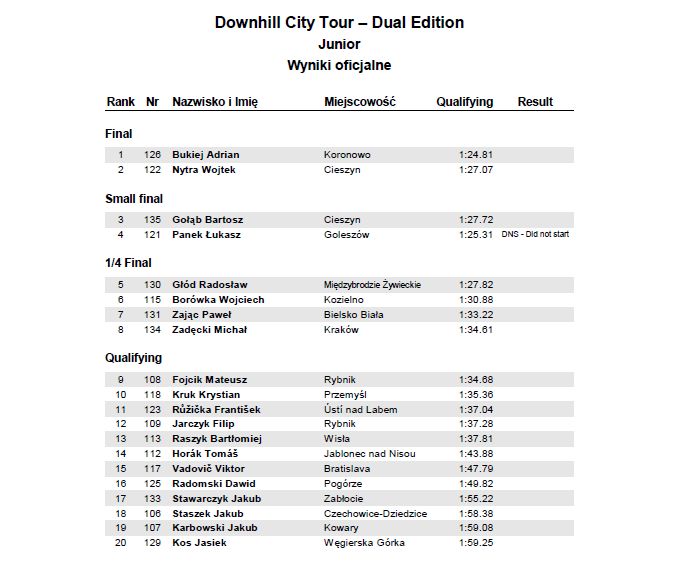 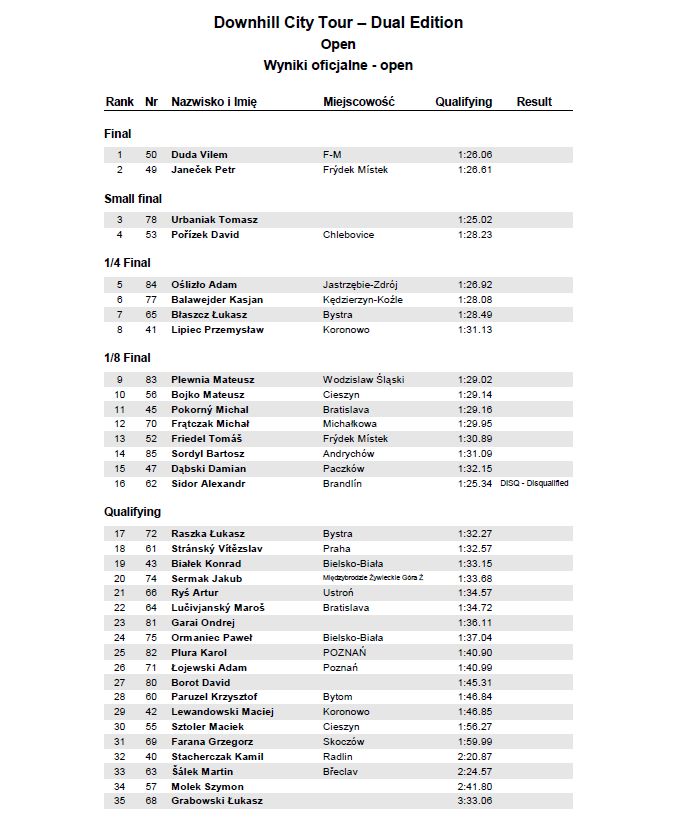 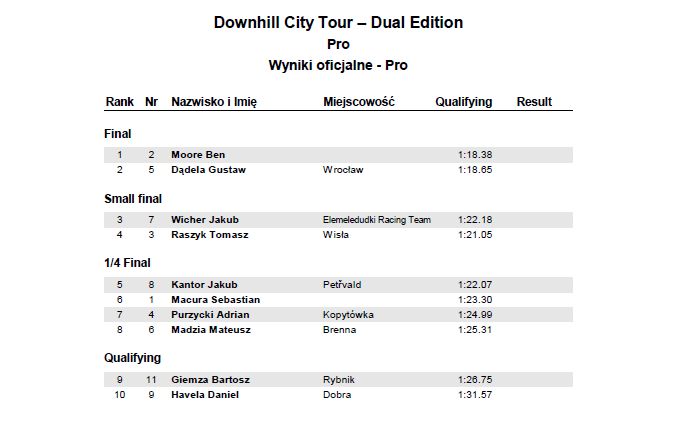 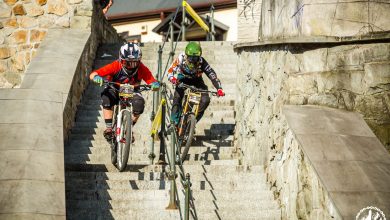